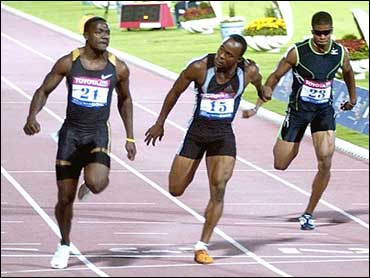 With so much attention paid to Pavel Bure, the rest of the Florida Panthers had it pretty easy against the New York Rangers.

Mike Vernon got his first shutout of the season, team captain Scott Mellanby scored for the first time in 15 games and Peter Worrell knocked down two Rangers with one blow Wednesday night as the Panthers beat New York 3-0.

"We're capable of doing this every night," said Vernon, who made 25 saves. "We just haven't done it with any consistency, and that's what championship teams do."

Vernon, who has 23 shutouts in 14 seasons, made a stick save to stop a breakaway by Petr Nedved and preserve a 2-0 lead with 13 minutes to play. Vernon's last shutout came at Phoenix on Feb. 8, 1999.

The Rangers constantly shadowed Bure with defenseman Brian Leetch, opening up plenty of scoring chances for everyone else. Even though Bure scored his league-leading 41st goal, New York was satisfied with the game plan.

"I think it went very well and it was very effective," Rangers coach John Muckler said. "Leetch was the right guy to play that position because of his hockey knowledge and the way he can skate. He can take shifts as long as Bure can take them, but you can only do it so long because then you fall behind."

The Panthers, who improved to 21-5-2 at home, scored the lone goal in the first period. Bure's slap shot from just outside the right circle deflected off the stick of New York defenseman Mathieu Schneider and past Mike Richter.

Worrell set the tempo for the physical game. On one play, he knocked Nedved and Theo Fleury to the ice.

"It was fun," Worrell said. "The only thing better would have been to get Leetch, too. That's one of the parts of my game to be physical."

Florida made it 2-0 with a power-play goal at 15:25 of the second. The Rangers' Valeri Kamensky, bleeding badly after taking a puck to the face, was off with an interference penalty after he grabbed Worrell's stick.

The Panthers scored 31 seconds into the man advantage on Ray Sheppard's one-timer past Richter. Worrell set up the goal, tipping Dan Boyle's pass from just inside the blue line to Sheppard, who was wide open in the slot.

"We never seemed to quite get back in the game after that," Richter said.

The Rangers went nine minutes without a shot to end the second period. Though Richter made several good saves stopping breakaways by Bure and Oleg Kvasha in the third period he couldn't keep Mellanby from scoring from point-blank range.

Richter stopped Mellanby's first shot with just more than 12 minutes to play, but Mellanby backhanded the rebound in to give Florida a 3-0 lead. The goal was Mellanby's 12th of the season and first in 15 games.