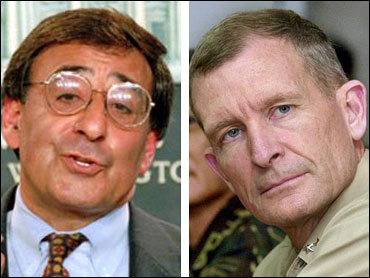 Leon Panetta, Barack Obama's surprise choice to head the CIA, clearly isn't someone with much hands-on national security or intelligence experience. But no one disputes that the man knows government.

The former eight-term congressman from California has had plenty experience in overseeing all aspects of the federal bureaucracy as a former chairman of the House Budget Committee, as budget director and then chief of staff for President Bill Clinton; and more recently as a member of the bipartisan Iraq Study Group.

Still, Hamilton said, "I think it will be very important that Leon bring into his inner circle, onto his team, professional intelligence people."

Panetta, 70, who has an easy laugh and slightly owlish demeanor behind large round glasses, was popular on both sides of the aisle in the 16 years that he represented the Monterey, California, district where he was born to Italian immigrant parents. He still lives there today with his wife, Sylvia.

The couple founded the Leon and Sylvia Panetta Institute for Public Policy in 1998 and both serve as the institute's directors. It is based at California State University, Monterey Bay, which he helped establish on the site of the former U.S. Army base, Ford Ord, where he served while he was in the Army from 1964-1966. According to his biography, "the Institute serves as a nonpartisan, not-for-profit study center for the advancement public policy, seeking in particular to attract thoughtful men and women to lives of public service."

As a first lieutenant, Panetta did have some experience with intelligence work.

A former Republican, Panetta, began his public career as a congressional aid, served in the Nixon administration as an assistant secretary of health, education and welfare and director of the U.S. Office for Civil Rights. He later served as executive assistant to New York Mayor John Lindsey. A lawyer, Panetta became a Democrat in 1971.

In his long government career, he was "a very popular guy, a very steady hand, somebody who was able to get the job done without making a lot of enemies," said Ross Baker, a political scientist at Rutgers University. Baker said those traits should help Panetta overcome inevitable grumbling in the intelligence community.

Not everyone was persuaded.

Fellow Californian Sen. Dianne Feinstein, set to chair the Select Committee on Intelligence, indicated that the choice caught her off guard.

"I know nothing about this other than what I read. My position has consistently been that I believe the agency is best served by having an intelligence professional in charge at this time," she said in a statement.

"She told me she's not saying she won't vote against him, but it will be an uphill battle now to get him confirmed," Schieffer said.

If confirmed by the Senate, Panetta will take over at a trying time for the spy agency, tarnished by infighting and by intelligence failures in the run-up to the war in Iraq.

Also, the CIA chief no longer reports directly to the president but to the relatively new post of director of national intelligence. Obama has selected Retired Adm. Dennis Blair to head that post.

"Between the DNI and the director of central intelligence, it's harder and harder to figure out who's directing what," said Anthony Cordesman, a national security analyst at the Center for Strategic and International Studies who has an intelligence background.

He suggested Panetta's brief experience with intelligence as a first lieutenant and much later as a member of the Iraq Study Group don't count for much.

"I didn't find that people in the Iraq Study Group developed any particular experience in intelligence," said Cordesman. "The recommendations that came out were essentially political."

Panetta also was apparently not Obama's first choice for the job. John Brennan, Obama's transition intelligence adviser with extensive intelligence experience, withdrew his name from consideration late last year over his role in some Bush administration detention and interrogation policies.

Panetta's supporters pointed to the Californian's managerial skills and ability to reach across party lines, as he did in 1996 when, representing the White House, he helped negotiate the 1996 budget, which took a major step toward balancing the budget.

"He is a strong personality with an incredible level of integrity," said Norman Ornstein, a scholar at the American Enterprise Institute who has served with Panetta on various boards and study groups. "The CIA is a large and complex organization. A large part of the job is about managing people, a skill that is not all that widespread."

In an interview two years ago, Panetta said his experience in Congress and at the White House persuaded him of the importance of not having "a tin ear to the political consequences" of major issues that grip the country, as he claimed Bush's team did on Iraq and Hurricane Katrina.

If a leadership vacuum or gridlock results, "leadership has to bear a lot of the responsibility. Because, in the end, it's up to them basically to be able to put discipline together to get both the House and the Senate to work," Panetta said.

Stephen Hess, a presidential scholar at the Brookings Institution, said Panetta's selection was an invigorating gamble by Obama.

"Let Panetta look at all of this mess from a clean slate," said Hess. "He is the wise outsider - inside government, outside intelligence. That's a great combination."