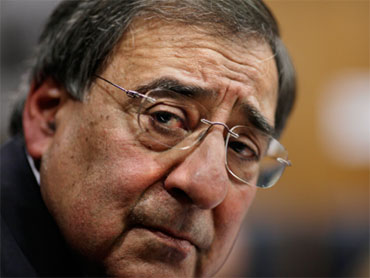 The U.S. has driven al Qaeda into hiding and undermined its leadership, but is struggling to oust its primary sympathizer, the Taliban, from Afghanistan, the U.S. spymaster said Sunday.

CIA Director Leon Panetta's assessment comes as President Barack Obama advances a risky new war plan that relies on 98,000 U.S. troops to prop up the Afghan government and prevent al Qaeda from returning. No longer overseeing the commander in chief's mission is Gen. Stanley McChrystal, sacked this past week in a stunning shake-up in U.S. military leadership after his critical comments about the White House.

"We're seeing elements of progress, but this is going to be tough," Panetta told ABC television's "This Week."

He said al Qaeda's evolving attack strategy increasingly relies on operatives without any record of terrorism involvement or those already in the U.S. As for Osama bin Laden, Panetta said it's been years since the U.S. had good intelligence about his whereabouts.

Panetta estimated there are fewer than 100 al Qaeda militants operating inside Afghanistan, with the rest hiding along Pakistan's mountainous western border. He said U.S. drone strikes and other spy operations have helped to "take down" half of al Qaeda's senior leaders.

"We are engaged in the most aggressive operations in the history of the CIA in that part of the world, and the result is that we are disrupting their leadership," Panetta said.

At the same time, Panetta offered a less upbeat assessment of the U.S. fight against the Taliban, the anti-U.S. insurgency operating inside Afghanistan's borders.

When asked whether the Taliban has grown stronger since Obama took office, Panetta said the Taliban was acting more violent and being more aggressive in "going after our troops," including its use of roadside bombs.

There is progress, he said, even if it's "slower than I think anyone anticipated."

As challenges in Afghanistan remain, the political clock is ticking. Many of Obama's most ardent Democratic supporters on Capitol Hill have said they are wary that more U.S. troops and money can solve the problem.

Sen. Carl Levin, chairman of the Senate Armed Services Committee, said troops should begin pulling out in July 2011, as Obama promised, because the Afghans must get the message that they need to take responsibility for their country.

Levin said he even would like to see a major military operation in Kandahar delayed until more Afghans can join the fight. The Michigan Democrat estimated fewer than 9,000 Afghan forces are operating in Kandahar - a fraction of those needed to take control of the southern city known as the Taliban's spiritual heartland.

Other Democrats suggested they are sympathetic to the complexities Obama faces.

The Taliban have "been running these areas for years now, and the idea we're going to walk in and they're going to run away, I think, was never contemplated," said Sen. Jack Reed of Rhode Island. "This is a tough fight, unfortunately."

Republicans said their biggest concern was that the 2011 deadline was set in stone. Obama has said troops will begin to pull out then, but that the pace and size of the withdrawal will depend upon conditions on the ground.

Sen. Lindsay Graham of South Carolina, who's influential on military matters, said his other major concern is the ailing effort by civilians to improve governance in Afghanistan.

One reason cited for McChrystal's firing was the discord between him and his civilian advisers. Gen. David Petraeus, head of U.S. Central Command, has been named McChrystal's replacement.

Graham said he wants to know if Petraeus will work better with Afghan President Hamid Karzi and Richard Holbrooke, who is special envoy to Afghanistan and Pakistan.

"We've got a dysfunctional relationship between the military-civilian components" and that relationship is "essential to winning a counterinsurgency," Graham said.

On a separate issue, Panetta said that the CIA had no choice but to hire the company once known as Blackwater for $100 million to provide security in Afghanistan.

Panetta said the company, now known as Xe Services, underbid others by $26 million and that a CIA review concluded that the contractor had cleaned up its act.

Blackwater guards are accused of opening fire on unarmed civilians in Baghdad in 2007, killing 17 people. A federal grand jury has indicted five Blackwater officials on conspiracy weapons and obstruction of justice charges.

Panetta says Moyock, North Carolina-based Xe does not engage in actual CIA operations, but instead helps secure agency bases in war zones. Seven CIA employees, including security contractors, were killed in a suicide bombing in Khost, Afghanistan, in December.

Levin appeared on CBS' "Face the Nation," Reed was on CNN's "State of the Union" and Graham spoke on "Fox News Sunday."