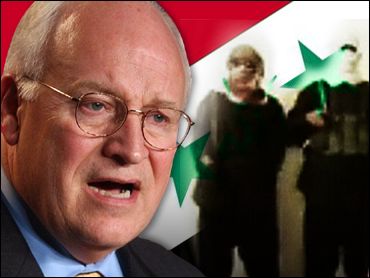 The Sept. 11 commission is standing by its finding that al Qaeda had only limited contact with Iraq before the terrorist attacks.

That assertion was one of the justifications the Bush administration gave for going to war with Iraq. In a preliminary report released last month, the Sept. 11 commission cited contacts between Saddam's regime and Osama bin Laden but said there was no "collaborative relationship."

In an interview with CNBC, Cheney had said there "probably" was information about Iraq's links to terrorists that the commission members did not learn during their 14-month investigation. The commission statement Tuesday disputed that.

The commission's vice chairman, former Democratic Rep. Lee Hamilton of Indiana, said on ABC's "This Week" that the panel "asked the vice president if he had information we did not have."

"Obviously, if there is some information, we need it," he said.

But Cheney's spokesman, Kevin Kellems, denied that the commission asked the vice president for additional information.

Since no information was provided, the panel wished to make clear that after some double-checking it was basing its findings on the same intelligence and material that Cheney had, Democratic commissioner Timothy Roemer said in an interview.

"Our position is firm, unchanged and committed to our previous finding," said Roemer, a former congressman from Indiana. "We have not discovered collaboration-cooperation between al Qaeda and Iraq in general terrorist activities across the world, against the United States."

Kellums, however, said the vice president was satisfied the panel had all relevant information to make an accurate determination. Cheney's main concern was about some media reports suggesting that al Qaeda and Iraq had no ties whatsoever, he said.

"We are pleased with today's statement from the 9/11 commission, which puts to rest a non-story," Kellems said. "As we have said all along, the administration has provided the commission with unprecedented access to sensitive information so they can perform their mission."

The commission, which faces a July 26 deadline to issue its final report, is winding down its 1½ year investigation into what went wrong and why.

Commissioners already have submitted substantial portions of the report to the White House for review and are meeting this week to hash out recommendations into how to prevent future attacks. Proposals under consideration include creating a domestic intelligence agency modeled after Britain's MI5.