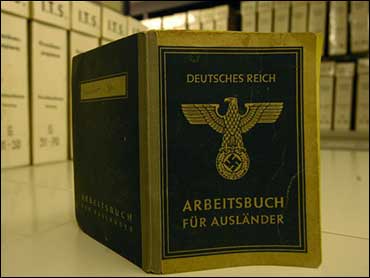 Millions of Nazi files that describe the mechanics of mass murder were a step closer to being opened to researchers following an agreement Tuesday by an 11-nation panel that has kept the archive locked away since World War II, officials said.

But first the draft must be signed by government ministers in Berlin — a date has not been set — and be sent back to the countries for ratification, said Paul Mertz, the Luxembourg Foreign Ministry official who is the chairman of the commission that oversees the archive.

The process is likely to delay the opening of the 50 million files to researchers until at least the end of the year, Mertz said.

The move to unlock the storehouse in the German town of Bad Arolsen came amid pressure from the dying generation of Holocaust survivors and victims' families who feared their histories would be lost forever unless the rules were changed.

The breakthrough came last month when Germany, which had said that access to the files by Holocaust researchers would violate the country's privacy laws, agreed to soften its secrecy rules.

Under the changed language agreed upon Tuesday, each country will be able to receive copies of the files and apply its own privacy rules.

The countries on the International Commission are Belgium, France, Germany, Greece, Italy, Israel, Luxembourg, the Netherlands, Poland, Britain and the United States. Some of them will require parliamentary approval of the agreement, but the U.S. State Department can endorse the amendments without involving Congress.

The documents in the archive include the registration of concentration camp inmates by the numbers burned on their arms, stacks of crumpled identity booklets and meticulously kept records of executions.

"Bad Arolsen is the most complete file. On many subjects it is unique," Mertz said.

The files also will be available to Holocaust survivors and families of victims whose fate may not be clear.

Having visited the archive, CBS News correspondent Mark Phillips describes it as the mother lode of Holocaust material. At a time of growing skepticism and denial of the Holocaust, that's no small thing.

Says Paul Shapiro, of the United States Holocaust Memorial Museum, "When you have a situation as we do today where a chief of state, the president of Iran, denies the Holocaust ... When you have records of 17-and-a-half million people, and their fate's recorded, including millions of Jews who were destroyed during the Holocaust, that's a very strong response to Holocaust denial."

The files, indexed and cross-referenced, contain the names of Jews, Roma, homosexuals, the mentally ill, "patients" subjected to cruel medical experiments, and millions of people forced into slave labor.

The card indexes alone occupy three massive rooms at Bad Arolsen, a spa resort in central Germany. The documents themselves, some yellow and crumbling, fill row after row of metal filing cabinets in six buildings.

The International Tracing Service, the arm of the International Committee of the Red Cross which is the archive's custodian, says it has scanned 56 percent of the files since 1999, but it cannot move faster without more funding.

"We have only a restricted budget, and we get the budget only for humanitarian work," said Maria Raabe, ITS spokeswoman in Bad Arolsen.

The service, which now has 400 employees, was founded after the war to trace missing persons. Later, survivors eligible for compensation applied to the archive for documentary evidence of their mistreatment.

But the service has lagged behind the number of requests for information, which still flow in by the tens of thousands every year. It now has a backlog of more than 400,000 inquiries.