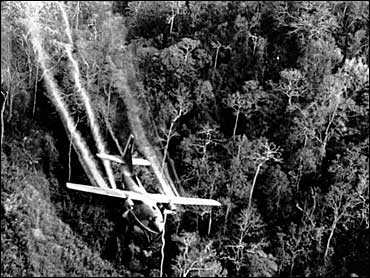 Thirty-five years after the Vietnam War, a $300 million price tag has been placed on the most contentious legacy still tainting U.S.-Vietnam relations: Agent Orange.

A joint panel of U.S. and Vietnamese policymakers, citizens and scientists released an action plan Wednesday, urging the U.S. government and other donors to provide an estimated $30 million annually over 10 years to clean up sites still contaminated by dioxin, a toxic chemical used in the defoliant.

The funding would also be used to treat Vietnamese suffering from disabilities, including those believed linked to exposure to Agent Orange, which was dumped by the U.S. military in vast quantities over former South Vietnam to destroy crops and jungle cover shielding communist guerrilla fighters.

Washington has been slow to address the issue, quibbling for years with its former foe over the need for more scientific research to show that the herbicide sprayed by U.S. aircraft during the war caused health problems and birth defects among Vietnamese.

"We are talking about something that is a major legacy of the Vietnam War, a major irritant in this important relationship," said Walter Isaacson, co-chair of the U.S.-Vietnam Dialogue Group on Agent Orange/Dioxin that released the report. "The cleanup of our mess from the Vietnam War will be far less costly than the Gulf oil spill that BP will have to clean up."

Their report said nearly $100 million was needed to restore damaged ecosystems and clean up dioxin-contaminated sites, with priority given to three former U.S. air bases in the central city of Danang, and the southern locations of Bien Hoa and Phu Cat — hot spots where Agent Orange was mixed, stored and loaded onto planes during the war, allowing spilled dioxin to seep into the soil and water systems.

Another $200 million would be devoted to expanding care and treatment for Vietnamese with disabilities, including those believed caused by dioxin.

Isaacson said he was hopeful the U.S. government will provide at least half the $300 million needed by 2020, with corporations, foundations and other donors supplying the rest.

"The war is over but the wounds from the war still remain in many areas of Vietnam," Nguyen Van Son, a member of Vietnam's National Assembly, said during the report's launch in Hanoi. "Many Agent Orange victims have died, but many other victims, including children with disabilities, have been fighting diseases under extreme hardship and they are in dire need of treatment and support."

The U.S. military dumped some 20 million gallons (75 million liters) of Agent Orange and other herbicides on about a quarter of former South Vietnam between 1962 and 1971.

The defoliant decimated about 5 million acres (2 million hectares) of forest — roughly the size of Massachusetts — and another 500,000 acres (202,000 hectares) of crops, the report said.

Dioxin has been linked to cancers, birth defects and other ailments. A study released last year by the Canadian environmental firm Hatfield Consultants showed that dioxin levels in some blood and breast milk samples taken from people who had lived near the Danang air base site were 100 times above safe levels.

Dioxin levels in soil, sediment and fish in the same area were 300 to 400 times above international limits. That report estimated up to 100,000 people living near the site still face a potential health risk from exposure.

Dioxin is slow to degrade. It works its way from the soil into the sediment of rivers, lakes and ponds via rainwater then attaches to the fat of fish and ducks, which can be eaten by humans and passed on to future generations.

The Vietnam Red Cross estimates up to 3 million Vietnamese children and adults have suffered health problems related to Agent Orange exposure. But the U.S. says the number is much lower, with many Vietnamese birth defects instead likely resulting from other health and environmental reasons, including malnutrition.

"We said, 'Let's leave aside exactly who's to blame for which illness that might have occurred,"' Isaacson, president and CEO of the Aspen Institute, a nonprofit group that promotes international dialogue, said by phone from Washington. "It's a mess we made ... and we'll get private money and a little bit of government money and we'll clean it up."

The Vietnam War ended April 30, 1975, when the former U.S.-backed regime in Saigon, the former capital of South Vietnam, fell to northern communist forces, reunifying the country.

Agent Orange has remained a thorny topic between the former enemies despite strong recent partnerships in areas ranging from economic to military. Next month, the U.S. and Vietnam will celebrate 15 years of normalized diplomatic relations.

The U.S. government has provided $9 million since 2007 to assist with Agent Orange in Vietnam. Another $12 million would be allocated as part of a bill being debated by Congress. A State Department official told reporters during a visit to Hanoi earlier this month that the U.S. hopes to find additional funding for more dioxin-related projects.