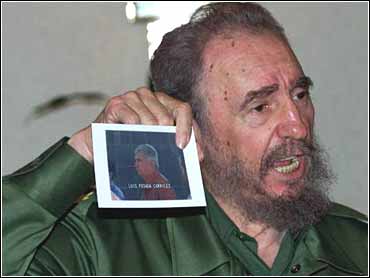 Moscoso, who hands over the presidency on Sept. 1 to Martin Torrijos, pardoned Luis Posada Carriles, Gaspar Jimenez, Guillermo Novo and Pedro Remon, according to an announcement sent to news organizations.

It was not immediately clear when they might be freed.

Moscoso had earlier denied Cuban government claims that she had taken a decision to pardon the four exiles.

Expressing anger at the tone of Cuban complaints, she withdrew her country's ambassador from the island this week and ordered the Cuban ambassador here to leave.

Cuban officials said that Posada, a former CIA operative, led the plan to kill Castro at a summit meeting here in November 2000. It has repeatedly described him as a terrorist.

He once escaped from a Venezuelan prison where he was awaiting retrial on charges of helping blow up a civilian Cuban airliner.

Cuba earlier had protested the seven- and eight-year prison sentences imposed on the men, saying they were not tough enough.

But Panamanian courts ruled there was not enough evidence to accuse the men of attempted murder or on other serious charges such as possession of explosives.

The defendants maintained they were in Panama to help a Cuban general who supposedly had planned to seek political asylum.

Posada, who once escaped from a Venezuelan prison while awaiting retrial on charges he blew up a Cuban airliner, and Cuban-American Gaspar Jimenez were convicted of endangering public safety and falsifying documents and sentenced to eight years each.

Moscoso's government said it also was lifting charges from 80 journalists charged with defamation or libel.

The Ministry of Government and Justice said the actions were taken under constitutional clauses that let the president "issue pardons for political crimes, reduce sentences and concede provisional liberty to prisoners for common crimes."