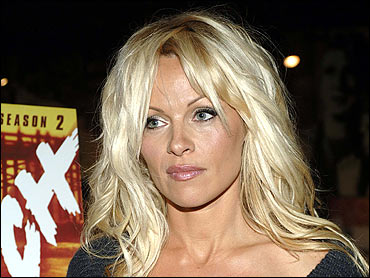 Pamela Anderson is concerned about her two children and wants to resolve her divorce from Kid Rock amicably, she said in a posting on her Web site titled "More divorce."

The former "Baywatch" star addressed the tabloid coverage of the split and how her kids do see it.

"Kids don't know the difference between fact and tabloid … does anybody?" she said.

The New York Post reported yesterday that a pal said that Kid Rock's "male insecurity and major anger issues," are to blame for the split and that a big fight over Anderson's participation in the film "Borat" caused tension between them.

"Truth is Bob is great in many ways — We just don't belong together," she writes. "We mutually agree. I love my children, he loves his son … we both have wonderful family and friends as support going thru this time."

Meanwhile, a source told the New York Post that Rock was tired of caring for the three children while she was out partying the night away.

"Pamela would go out almost every night and end up at (photographer) David LaChapelle's studio," Rock's friend tells the Post. "Bob was home alone with the three kids."

The Post reports that Anderson talks about her partying in this month's Blender magazine: "When I go to Hollywood, I start at the Chateau Marmont and then I usually end up naked in David LaChapelle's studio taking crazy pictures. That's usually a night for me. Four or five in the morning, lying across a car in David's studio."

The source told the newspaper that Rock doubts Anderson's claims of a miscarriage.

"Bob never saw any proof or heard from her at any time that she was pregnant," the source said. "She announced she had a miscarriage. He flew to Canada (to the set of the film "Blonde and Blonder") to be with her and she went out every night."

The source added that Anderson refused to sign a prenuptial agreement even though Rock asked her to. "Pamela doesn't have the money in the relationship — he does," his pal told the Post.

A rep for Anderson told the Post: "There was an agreement there would be a post-nup, which was being negotiated up until they split. Pam is a wonderful mother, always there for her kids, and has only been to David's twice since she married. And unfortunately, she absolutely had a miscarriage and only found out she was pregnant a few days before."

Another Anderson pal told the newspaper that when Anderson was shooting "Blonde and Blonder" her mother came to care for the children because Rock was recording an album in Detroit.

"He never once single-parented her kids," the friend says.
By Amy Bonawitz