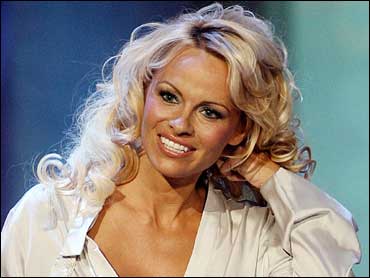 After arriving Thursday to host a music festival west of Helsinki, Anderson told Finnish President Tarja Halonen in a letter that her nation should emulate other countries that have banned fur farms.

"It's time for Finland to move into the 21st century and follow suit," said Anderson, whose great-grandfather was Finnish. The letter was distributed to the media by People for the Ethical Treatment of Animals.

Anderson said on her blog that she's traveling in the country with her father. "Our heritage is here," she wrote. "We are both excited. We will be taking lots of saunas. Save my liver. Also I thought of a great way to celebrate my Finnish heritage at home. I'm going to look into opening a chain of strip clubs and I'll call them LAPLAND!"

She also addressed the issue of the fur farms on her blog, saying "There are hundreds here. The demand is getting lower for fur coats and they breed foxes here just for fur. Awful. Sweden, Austria and England have banned fur farms. Let's hope Finland will too. Other than that I'm very proud of my Finnish heritage. It is the most beautiful countryside."

Finland's fur auctioneers said the appeal was unrealistic. "It's not surprising coming from her, a known anti-fur campaigner," said Paivi Mononen-Mikkila, a spokeswoman for the Finnish Fur Sales auction house. "It's really not realistic, as so many people earn their livelihood from the fur trade."

Finland, one of Europe's top fur producers, has 1,400 farms that produce about 2 million fox furs annually. The industry employs 10,000 people.