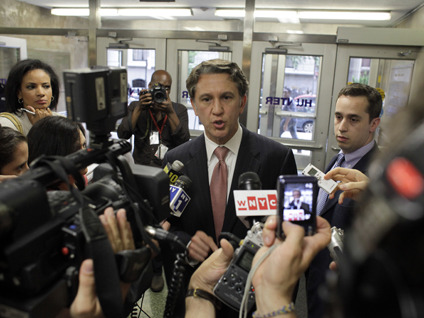 Former Alaska Gov. Sarah Palin weighed in on Sunday on the controversy over a mosque planned near ground zero, but her remarks were met with a wave of criticism over her sentiment and her choice of words.

"Ground Zero Mosque supporters: doesn't it stab you in the heart, as it does ours throughout the heartland? Peaceful Muslims, pls refudiate," Palin said via Twitter.

She subsequently deleted her "tweet" and published a new message, which did not include the made-up word "refudiate": "Peaceful New Yorkers, pls refute the Ground Zero mosque plan if you believe catastrophic pain caused @ Twin Towers site is too raw, too real."

Other commentators, however, were already pouncing on her messages.

Libertarian blogger Jon Henke attacked Palin's sentiment rather than her words: "We want peaceful Muslims to distinguish themselves from radical Muslims, but we can't distinguish between a peaceful Mosque & terrorists?"

At the center of the controversy is the proposed 13-story project a few blocks away from Ground Zero that will house a mosque, a gym and a community center for several groups, including the American Society for Muslim Advancement and the Cordoba Initiative, which promotes cross-cultural understanding between Islam and the West.

Daisy Kahn, a spokeswoman for the group reportedly said in a written statement, "We agree with Ms. Palin that it is time to heal from the wounds of the tragic events of 9/11. We peace- loving Muslims have a responsibility to lead the effort of rebuilding Lower Manhattan. We envision a community center for multi-faith collaboration that is focused on promoting integration, tolerance of difference and community cohesion."

Meanwhile, bloggers continued to skewer Palin for her language choice after her second tweet. Blogger Charles Johnson notes that Palin uses the word "refute" incorrectly in her second tweet, while he points out that she used the word "refudiate" last week during an appearance on Fox News.

Palin continued tweeting new messages on the subject, given all the attention her messages were receiving.

Palin followed up with a message making light of the jokes coming at her expense: "'Refudiate,' 'misunderestimate,' 'wee-wee'd up.' English is a living language. Shakespeare liked to coin new words too. Got to celebrate it!"

Other Twitter users apparently took Palin's message to heart, combining the language of Shakespeare and Palin's rhetoric to create unique messages under the hash tag #ShakesPalin.