Sarah Palin, nearly two weeks into her new life outside of Alaska politics, is adding her voice to the health care reform debate via her Facebook page, suggesting that implementing the Obama administration's proposed plan would allow bureaucrats to decide whether the sick, elderly and disabled, including children with Down Syndrome (like her own baby, Trig), are worthy of health care.

She wrote a brief post, "Statement on the Current Health Care Debate," in which she said:

"As more Americans delve into the disturbing details of the nationalized health care plan that the current administration is rushing through Congress, our collective jaw is dropping, and we're saying not just no, but hell no! 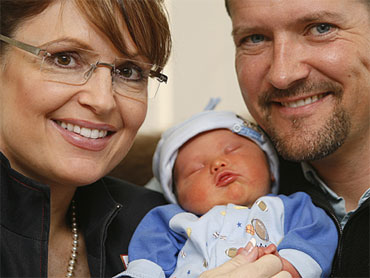 (AP Photo/Al Grillo)
"The Democrats promise that a government health care system will reduce the cost of health care, but as the economist Thomas Sowell has pointed out, government health care will not reduce the cost; it will simply refuse to pay the cost. And who will suffer the most when they ration care? The sick, the elderly, and the disabled, of course. The America I know and love is not one in which my parents or my baby with Down Syndrome will have to stand in front of Obama's 'death panel' so his bureaucrats can decide, based on a subjective judgment of their 'level of productivity in society,' whether they are worthy of health care. Such a system is downright evil.

"Health care by definition involves life and death decisions. Human rights and human dignity must be at the center of any health care discussion."

The "death panel" she conjures is a reference to the Advance Care Planning Consultation section on page 425 of the H.R. 3200, Democratic House bill , according to Palin spokeswoman Meghan Stapleton.

Stephanie Condon's CBSNews.com story, 10 Health Care Reform Myths, examined whether H.R. 3200 mandates or encourages euthanasia or "death panels," and she concluded that the bill offers a provision in which Medicare would cover patient-doctor consultations about end-of-life planning for the first time, which is different than an Obama "death panel" that would decide whether former Governor Palin's Down Syndrome baby is "worthy of health care."

At a tele-town hall meeting with members of the senior advocacy group AARP last month, President Obama could not help but describe one question he received as "kind of morbid."

"I have been told there is a clause in (the health care bill) that everyone that's Medicare age will be visited and told to decide how they wish to die," said a caller named Mary from North Carolina. "This bothers me greatly, and I'd like for you to promise me that this is not in this bill."

There is nothing in any health care reform bill before Congress that would require people to "decide how they wish to die."

Conservative talking points from activists and legislators, however, would suggest otherwise.

This rumor gained traction in large part because of comments from New York's former Republican lieutenant governor Betsy McCaughey. On a radio show on July 16, McCaughey said she had read the bill and discovered that "Congress would make it mandatory . . . that every five years, people in Medicare have a required counseling session that will tell them how to end their life sooner, how to decline nutrition, how to decline being hydrated, how to go into hospice care . . . all to do what's in society's best interest . . . and cut your life short."

"Section 1233 of the House-drafted legislation encourages health care providers to provide their Medicare patients with counseling on 'the use of artificially administered nutrition and hydration' and other end of life treatments, and may place seniors in situations where they feel pressured to sign end of life directives they would not otherwise sign," they said. "This provision may start us down a treacherous path toward government-encouraged euthanasia if enacted into law."

In fact, Section 1233 of Democratic House H.R. 3200 would allow Medicare for the first time to cover patient-doctor consultations about end-of-life planning, including discussions about drawing up a living will or planning hospice treatment. Patients could, of course, seek out such advice on their own — but they would not be required to. The provision would limit Medicare coverage to one consultation every five years.