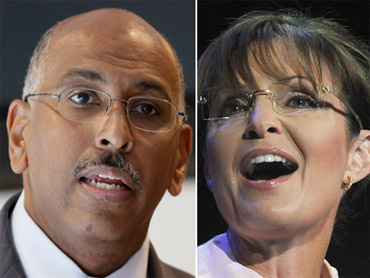 Republican National Committee Chairman Michael Steele is in trouble with many in his party after speaking out against the war in Afghanistan. Some are even calling for him to be removed.

John McCain's one-time running mate and former Alaska governor is, as Plante puts it, "the star of the Republican Party. She's the top endorser, top fundraiser -- and now could be the party's top dog. Some members of the GOP base are calling for her" to take Steele's place.

He was caught on tape recently failing to tow the party line on the Afghan war, calling it "a war of Obama's choosing" and adding, "This is not something the United States has actively prosecuted or wanted to engage in."

This isn't the first time Steele's been in hot water with members of his own party.

Among other incidents and gaffes, in April, he had to apologize after members of his staff took donors to a sex-themed club in Los Angeles.

Still, says The Associated Press, Steele is likely to stay put. "Even his GOP critics," says the AP, citing interviews with more than a dozen party operatives, "want to avoid a drawn-out fight over the party's most prominent African-American just four months before midterm elections."

And Plante points out that replacing Steele with Palin poses some risks. While a recent Pew poll finds that 40 percent of respondents have a favorable view of Palin, 51 percent don't -- which is why political analysts such as National Journal Hotline Editor Reid Wilson says -- don't hold your breath.

"She has a national platform now," Wilson observes. "Becoming the RNC chair ... would rope her in and keep her in (Washington) D.C., and inside a box that I don't think she fits in or wants to fit in."

Republicans, says Plante, have made Steele virtually irrelevant. Donations to the RNC are down and instead, donors are giving their money to groups such as the Republican National Senatorial Committee and the Republican Governors Association.