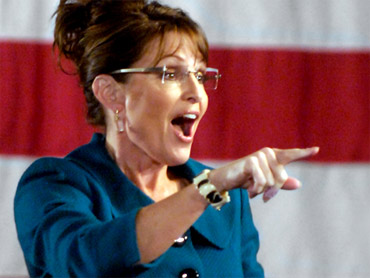 Former Alaska governor and 2008 GOP vice presidential candidate Sarah Palin will be speaking at an event hosted by the group Wisconsin Right to Life this evening.

It is a closed event – which generally means no press. Amid apparent worries that the ex-governor's words will be aired publicly despite that restriction, however, Wisconsin Right to Life and/or Palin's handlers are taking the notion of "closed" to a whole new level.

Check out this list of prohibited items at the event, which was spotted by CBS News Political Director Steve Chaggaris. All bags, by the way, "will be searched":

Tickets for the event at the Wisconsin Exposition Center outside of Milwaukee, which go for $30, appear to still be available.

The restrictions are "bizarre," according to Democratic Party of Wisconsin Chair Mike Tate.

"You know, for someone who claims to be a rogue and isn't afraid of what other people think it really is sort of hypocritical to not let the media, the press cover your event," he told Wisconsin Radio Network.

Palin's memoir "Going Rogue" is set to be released in less than two weeks, and she is planning a publicity tour.