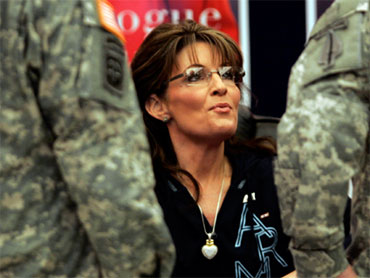 (AP)
Sarah Palin is offering rare praise for President Obama following his speech last night in which he vowed to deploy 30,000 additional troops to Afghanistan.

"At long last, President Obama decided to give his military commanders much of what they need to accomplish their mission in Afghanistan," Palin wrote on her Facebook page last night.

"We now have an opportunity to build a bipartisan consensus in support of a vital national security priority: defeating Al-Qaeda and its violent extremist allies in Afghanistan and Pakistan, and ensuring that these countries never again serve as bases for terrorist attacks against America and our allies," she wrote.

The former Alaska governor was not entirely on board with Obama's speech last night, however. She took issue with the president setting July 2011 as a date to begin pulling troops out of Afghanistan, arguing the move amounts to "sending the wrong message" to our allies and enemies.

"We should be in Afghanistan to win," Palin wrote. She said a timetable signaled "a lack of resolve to our friends" and gave inspiration to American enemies to simply "wait us out."