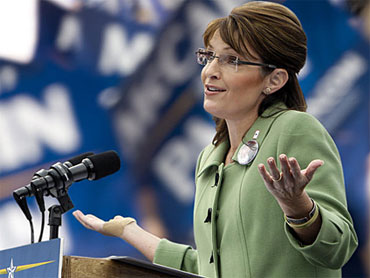 (AP)
Following up on her Tea Party speech in Nashville last night, Sarah Palin continued her grassroots campaign to rally independents, Republicans and disaffected conservative Democrats — and promote her own agenda.

When asked in an interview by her FoxNews colleague Judd Berger whether she would jump in the ring and challenge President Obama, the ex-Governor of Alaska said, "I would be willing to if I believe that it's right for the country.

"Today I see many, many other men and women across our country who are in as strong or stronger position than I am to take on the White House, and if they're in a better position than I in three years, I'll support them," she said.

On "Fox News Sunday" she said it would be "absurd" for her not to consider a 2012 presidential bid.

In the same interview, Palin also reiterated her vice-presidential campaign stance that she had more experience than Mr. Obama for the job of running the country.

"Barack Obama had 150 days in the U.S. Senate where he was able to vote quite often 'present,' not have to make decisions, being one of many, not having to manage," she said. His executive position now in the White House is as, whether he likes it or not, a manager. He has to make tough decisions. He has to be willing to fire people, though you don't make any friends when you fire people and I know that first hand because I've had to do that. And you have to make tough decisions, and not dither on issues. You have to make quick decisions in many respects, and I think that President Obama, with all due respect, his lack of experience is really made manifest in the way that decisions are made in the White House today."

For now it appears that Palin will continue to barnstorm the country to push her agenda among Tea Party activists, support like-minded Republican candidates, give $100,000-per-hour speeches, offer punditry on Fox News, attempt to earn some foreign policy cred, and further test the waters for a presidential run in 2012.

If all goes according to plan, Palin would become the standard bearer of the Republican — not just the Tea — Party. Stay tuned for more of this reality show.