(FAIRBANKS, Alaska) Sarah Palin's homecoming to Alaska felt more like a victory party than a campaign rally, complete with confetti shooting out into the crowd of over 1,000 people who had come to get a glimpse of their state's favorite daughter.

After two weeks away from the 49th state, Palin was clearly overjoyed to be back in more familiar surroundings where people "know that up here, it's a snow machine, not a snowmobile."

Minutes after her newly minted campaign plane—"Straight Talk 2"—touched down from a 10-hour flight from Washington, D.C., Palin was greeted on the runway by her daughters Piper and Willow and infant son Trig. 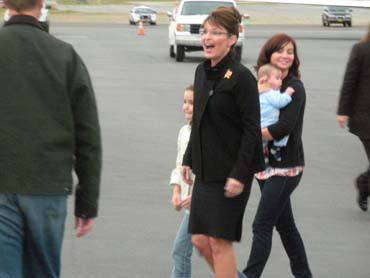 She walked a short distance to the hanger where she spoke for about 15 minutes to the cheering throngs.

"I knew the coldest state would give us the warmest welcome, so I thank you so much," she said. 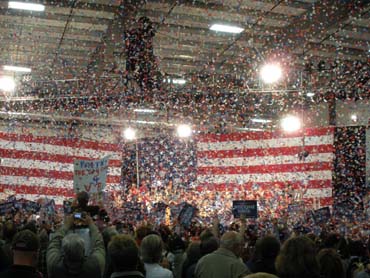 Aside from the occasional sprinkles of local flavor, Palin stuck to her stump speech, as she has done throughout her time on the campaign trail. But there was one small—but perhaps telling—change to her standard remarks. Instead of delivering her usual line about putting the Alaska governor's private jet on eBay, Palin said simply, "the state's luxury jet, it's sold."

Palin has previously fallen under some criticism for not pointing out that the jet didn't actually sell on eBay and instead ended up being dumped for a net loss.

On Thursday, Palin will speak at the deployment ceremony for the 1st Stryker Brigade Combat Team, 25th Infantry Division at Fort Wainwright in Fairbanks. The governor's 19-year-old son Track is a member of the unit that is being deployed for training for an Iraq tour of duty.

The deployment ceremony was previously thought to be closed to the media, but a press release issued by the U.S. Army indicates the event is open.