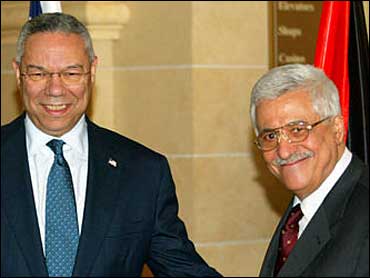 Palestinian leaders have put aside reservations to parts of the U.S.-developed plan for peace with Israel and are ready to get started on it, Prime Minister Mahmoud Abbas said Sunday, heeding an appeal by Secretary of State Colin Powell.

"We have accepted it as it is," Abbas said. "True, maybe we have some reservations. But in order to give a way for the peace process, we have dropped down all our reservations, and we said that we accept it as it is."

While other Palestinian leaders accused Israel of hedging in its acceptance, Abbas spoke forcefully about continuing with the plan to gain a Palestinian state within three years on land still partly ruled by Israel. Abbas also was clear about his goals:

"We look forward to stopping, ending, totally ending settlement, ending the siege, ending the separation wall, assassinations, the collective punishments, destruction of farms and the infrastructure and restricting the movement of citizens and Palestinian institutions and to set out to free thousands of Palestinian prisoners."

For his part, Israeli Prime Minister Ariel Sharon said, after conferring in Jerusalem with Powell, that Israel soon would meet with Palestinians, "and with the help of the Americans, we will be able to achieve a settlement that will lead to peace."

On that front, Abbas told Powell he wanted to go beyond a cease-fire eventually to uproot those carrying out the violence, a senior State Department official said, speaking on condition of anonymity. He said Abbas wants to consolidate authority and end competition with other groups for his own sake.

And Nabil Shaath, a top Palestinian official, said in a broadcast interview that Abbas accepted an invitation from Sharon to meet before Sharon goes to Washington on May 20 to see President Bush.

"We see no other game in town," Shaath said. "This is the only way available now for peace."

Under the peace blueprint, Palestinians must rein in militants and combat terror, and Israel must remove illegal Jewish settlements and freeze construction in more established Israeli communities in the West Bank and Gaza Strip.

On the ground, the violence did not stop. Palestinian gunmen killed an Israeli motorist in the West Bank, and Israeli troops raided a Palestinian town.

Summing up his busy day, Powell said he had found "sufficient good will to get started" toward implementing the blueprint, or "road map." It was developed by the Bush administration with the European Union, the United Nations and Russia in an effort to end 31 months of conflict, commit Israel and the Palestinians to stop the violence, and establish a Palestinian state.

Powell plans to confer Monday in Jerusalem with Christian Jouret of the European Union, Terje Rowed Larsen of the United Nations and Andred Vdovin of Russia, the U.S. partners in the so-called quartet, on the state of the process and results of his talks. Then he goes to Egypt, Saudi Arabia and Jordan to urge Arab leaders to back his diplomacy and to use their influence with the Palestinians to stop attacks on Israel.

Yasser Abed Rabbo, a Palestinian minister, suggested the path ahead would not be smooth, noting that the Israelis are insisting on reopening the "road map" for a number of revisions. His Cabinet colleague, Shaath, said, "What's missing is not where the U.S. stands, it's where Israel stands."

Abbas' emergence as the Palestinian leader with whom the United States intends to deal is not universally accepted. European leaders contend that Yasser Arafat, as head of the Palestinian movement, should not be shunned.

Abbas made a public demand in Powell's presence that Israel remove its travel restrictions on the chairman of the Palestinian Authority. Israel currently has Arafat isolated in his Ramallah headquarters, heavily damaged by Israeli military action.

Earlier, in Jerusalem, Powell reaffirmed the U.S. position of shunning Arafat. He said that with Abbas "we see a new dimension" in Palestinian leadership, and "we will do everything we can to enhance his authority to get the job done."

"We recognize that Mr. Arafat is still there but the United States will not be dealing with him," said Powell.

He said he was "in close touch and contact" with European foreign ministers and "made it clear to them we believe this is the time to invest in new leadership. I hope that with the passage of time, my European colleagues will see the wisdom of acting in that way."

Abbas, a top Arafat deputy for decades, received the U.S. blessing as a reformer who also would speak out against terror.

In the past, Abbas has been accused of minimizing the loss of Jewish lives in the Nazi Holocaust and suggesting the Holocaust was a plot by Zionists. Of late, he has made several statements disapproving violent attacks on Israel, which won praise from the Bush administration.

Also Sunday, Powell said the United States would provide $50 million to Palestinians living in the West Bank and Gaza to create jobs, rebuild the infrastructure and revive their economy. That money is along with the $75 million in U.S. aid this year, and more than $700 million since 1996.