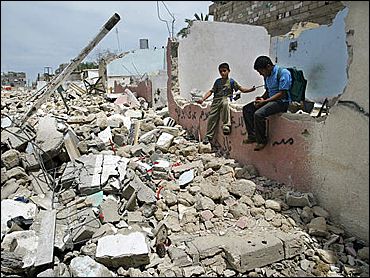 Israeli forces fired tank shells, helicopter missiles and machine-guns Wednesday on a large crowd of Palestinians demonstrating against an Israeli invasion of a neighboring refugee camp, killing at least 10 people, the majority of them children, Palestinian witnesses and medical workers said.

At least 50 people were wounded in the attack, also mostly children, a hospital official said.

The demonstrators — apparently almost all civilians — were marching from the town of Rafah toward the neighboring refugee camp when tanks and helicopters fired at least four shells and four missiles, witnesses and Palestinian security officials said.

Associated Press Television News footage showed a large explosion going off in a crowd of demonstrators, followed by Palestinians carrying the injured — among them several children — from the scene.

Israeli helicopters were overhead at the time and tanks were in the area, but it was unclear what caused the explosion.

The Israeli army had no immediate comment, but defense sources said the military had begun a high-level inquiry into the incident.

It was the second day of a major operation in the camp, reports CBS News Correspondent Robert Berger. The Palestinians appealed for international intervention, as Israeli forces swept through the Rafah refugee camp in Gaza.

Palestinian Cabinet Minister Rassan Khattib called on the U.S. and United Nations "to take the necessary, practical steps to stop this Israeli campaign of killing Palestinians and demolishing their houses."

There has been sharp international condemnation of Israel's demolition of homes.

Israel said the aim of the operation is to target armed militants and destroy tunnels used to smuggle weapons from Egypt to Gaza.

"We do not systematically demolish houses," said army spokeswoman Sharon Feingold. "We are operating against these tunnels."

Thousands of residents of the besieged Tel Sultan neighborhood of the Rafah refugee camp began surrendering Wednesday, heading toward the town square with white flags, the army and residents said.

Troops called on armed men to surrender, and about 2,000 men gathered in the center, carrying white flags, residents and the army said. Residents said the army had issued a second call for all men to surrender.

"We have all left our homes, and tanks are surrounding us from all sides. From time to time they are firing machine guns randomly," said Izzedeen Adwan, 27.

The army launched its "Operation Rainbow" operation on Tuesday. Twenty Palestinians were killed, the highest single-day death toll in more than two years. Palestinians said many of the casualties were civilians.

The massive invasion — the largest in the Gaza Strip in years — came less than a week after Palestinian militants killed 13 soldiers — seven in the Rafah area.

The invasion knocked out electricity in the Rafah refugee camp, home to an estimated 90,000 people, local Palestinian officials said. By Wednesday, water service had been halted as well due to the power outages, they said.

Palestinians accused the army of intentionally knocking out power to the camp, an accusation the army dismissed as "ludicrous."

Lt. Col. Grisha Yakobowits, the army's humanitarian coordinator in the area, said the army had restored power overnight and was working to resolve Wednesday's disruptions as well.

Military officials, speaking on condition of anonymity, said the operation would take place in three stages lasting at least a week. The first stage, cutting Rafah off from the rest of Gaza, was completed Monday.

The third stage would target smuggling tunnels and widen a road along the Egyptian border, razing dozens of homes in the process. The officials said the army was waiting for approval from the attorney general, and also is concerned about international opposition to home demolitions.

The United Nations and European Union has already demanded a halt to the invasion. U.S. officials described the violence as "troubling," but affirmed Israel's right to defend itself.

Salwa Abu Jazar, a 33-year-old mother of four living in Tel Sultan, said her family got almost no sleep overnight because of the sound of combat helicopters and shooting that echoed through the camp.

"There is no water, no electricity, and it is very hard to move inside the house using candles because snipers in the building next door will shoot you," Abu Jazar said.

Early Wednesday, the army said it demolished the Rafah home of an Islamic Jihad militant it said was responsible for a shooting attack earlier this month that killed a pregnant Israeli settler and her four daughters. Palestinian witnesses said at least three homes were demolished overnight.

Ali Bayomi, a 55-year-old resident of Rafah, said soldiers had arrested two of his cousins and were using the men as human shields as they conducted home searches. A military spokesman had no information on the incident, but said army rules prohibit the use of human shields.

Saleem Katib, 25, said his father went to morning prayers early Tuesday and still had not returned. He said his father — an elderly, sick man — was holed up near the mosque with other worshippers.

"How can you believe that a man can't reach his home when he is only 20 meters away?" Katib said.

Also Wednesday, Israeli forces entered a refugee camp next to the West Bank town of Jenin, and killed a Palestinian militant who was a member of the Al Aqsa Martyrs' Brigades, a group linked to Yasser Arafat's Fatah movement.

Also, an Al Aqsa militant was killed in an exchange of fire with Israeli soldiers in the West Bank city of Nablus early Wednesday.

Prime Minister Ariel Sharon is considering bringing a slightly revised version of his Gaza pullout plan to the Cabinet by next week, including a phased withdrawal and a possible international force to guard the border, an Israeli government official said Wednesday.

Sharon has been trying to revive the pullout plan since his Likud Party rejected the proposal in a referendum earlier this month. Sharon has said he remains committed to the plan, which opinion polls show is supported by a solid majority of the Israeli public.