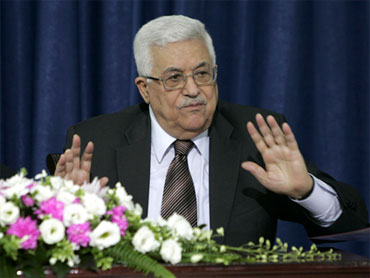 The Palestinians have long feared the Jewish lobby in Washington. Now, they are embracing it.

During a swing through the U.S. capital this month, Palestinian President Mahmoud Abbas was the guest of honor at a dinner with a small but influential gathering of more than 30 Jewish American leaders and political heavyweights. In what participants on both sides have described as a highly successful meeting, Abbas patiently fielded questions for more than 90 minutes, discussing such touchy topics as Mideast peace talks, anti-Israeli incitement in the Palestinian media, violence and terrorism and the Holocaust.

It was a dramatic departure for the Palestinians, who have traditionally viewed the American Jewish leadership with a mixture of awe, animosity and envy for its political skills and influence over what is seen as a pro-Israel U.S. policy.

Palestinian officials say it was the first time Abbas has met with such a large and diverse group of Jewish leaders, and reflected a realization that courting American Jews could benefit the Palestinians.

"I think it's a mistake to ignore these institutions and communities by saying that they are against us, and that we should not talk to them," Abbas told The Associated Press. "No, we should sit with them, and we should try to convince them by talking to them."

With indirect U.S.-brokered peace talks just getting under way, Abbas said he also felt it was important to explain his positions. Specifically, he defended his refusal to hold direct negotiations with Israeli Prime Minister Benjamin Netanyahu, saying more progress is needed before face-to-face talks can begin.

This week, Abbas said in the West Bank that he has heard nothing from Israel to encourage him to move to direct talks - highlighting his decision to find other ways to influence events as efforts to engage Israel falter.

According to a transcript of the June 9 dinner, Abbas made a number of conciliatory statements. He repeatedly condemned violence, recognized the Jewish connection to the Holy Land and informed the audience that he had sent representatives to attend Holocaust commemoration ceremonies in Russia and Poland.

"I want to tell everyone that these people suffered, and we are suffering. Now we want peace between each other," Abbas was quoted as saying. He rejected Holocaust denial, a common sentiment in Palestinian society.

Abbas also acknowledged Israeli security concerns, saying he would allow foreign troops into a future Palestine to help maintain the peace. He vowed to remove incitement from Palestinian airwaves and textbooks.

The event took place at the S. Daniel Abraham Center for Middle East Peace, and the audience included leading personalities that spanned the spectrum of Jewish opinion.

Among them were Elliot Abrams, a veteran of the Reagan and second Bush White Houses; Sandy Berger, the National Security Adviser to Bill Clinton; publisher Mortimer Zuckerman; and leaders from major Jewish groups like the powerful AIPAC lobby, the Conference of Presidents of Major American Jewish Organizations and the Anti-Defamation League.

"The unequivocal rejection of violence was both a powerful statement and made a significant impression," Wexler said.

Abbas' statements on other issues, such as anti-Israel incitement in Palestinian media and textbooks, were less persuasive with some participants, Wexler said. In vowing to fight incitement, Abbas suggested a dormant U.S.-Israeli-Palestinian committee resume work on the topic.

Nonetheless, Wexler said Abbas' attempt to reach out to the Jewish community appeared to be widely appreciated.

He said Abbas insisted the session be conducted on the record, and after a brief opening statement in Arabic, conducted the session in English to better connect with the audience. Abbas rarely speaks English in public.

Participants said Abbas was so engrossed in the conversation that he didn't even eat his dinner. When flying home two days later, he still spoke warmly about the event.

"The point I think leaders took was that this was a unique opportunity to create a true, candid dialogue between parties, meaning the Palestinian leadership and the American Jewish community, where that dialogue in the past has been lacking," Wexler said.

Not all guests were swayed.

Abrams, a top Bush adviser on Mideast affairs, acknowledged that Abbas' condemnations of violence make him "an appealing person." But he said that most of Abbas' comments lacked substance, and that he likely did little to change people's minds.

"For those in the 'Peace Now' camp," Abrams said, referring to a dovish Israeli activist group, "it showed how dedicated to peace he is. He seems to realize fully that the use of violence will only harm Palestinians. But for those who are more skeptical about his ability to deliver, his evasiveness suggested that he doesn't want to be pinned down on substantive issues."

Abrams acknowledged that the Palestinians' meeting with Jewish leaders is "an intelligent thing to do," but added, "if they think it is a substitute for meeting with the government of Israel, they are making a huge mistake."

Israeli government officials in Jerusalem and the Israeli Embassy in Washington declined to comment on the meeting.

Abbas said he hoped to continue the dialogue by inviting the group to visit the West Bank. He also hopes to hold a similar meeting with Jewish leaders in France in the near future.

"I talked to them in the same language that I speak on the Palestinian street. I found them accepting what I was saying, and this is good," Abbas said.