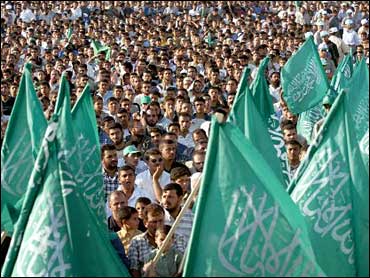 The Palestinian security chief called for an end to suicide bombings against Israel, denouncing them as "murders for no reason," in an interview published Friday in an Israeli newspaper.

Israel's chief of police, however, warned that despite relative calm for the past three weeks, Palestinian militants are still trying to carry out attacks against Israelis. Thursday, the Islamic militant group Hamas - which has carried out numerous suicide bombings in the past - pledged revenge for Israel's killing of four civilians in Gaza.

Also Thursday, U.N. Mideast Envoy Terje Roed-Larsen called on Israel to ease restrictions on Palestinians on the West Bank and in the Gaza Strip. Roed-Larsen, who has been visiting the area this week, said curfews and other restrictions this spring pushed up unemployment in the West Bank from 36 percent to 50 percent, the same level as in Gaza, where there has been little change.

"I am deeply disturbed by the figures," said the U.N. diplomat. "But I am not surprised, given the iron grip that Israel has imposed on the West Bank."

Israel has said the measures are necessary to prevent terror attacks against civilians, and several months ago imposed a policy of following new terror attacks with new restrictions on civilians, often in the hometown of the most recent suicide bomber.

In violence Friday, the Israeli army said three Israeli soldiers were wounded, two seriously, in exchanges of fire with Palestinian gunmen in the Jenin refugee camp at the northern edge of the West Bank.

Interviewed in the Yediot Ahronot daily, the Palestinian security chief, Interior Minister Abdel Razak Yehiyeh, said he told leaders of Palestinian groups, including Hamas and Islamic Jihad, to "stop the suicide bombings, stop the murders for no reason."

An aide to Yehiyeh confirmed that he had talked to the Israeli newspaper.

Yehiyeh, a retired general, was appointed interior minister in June in a Cabinet reshuffle, taking charge of Palestinian security forces. Palestinian President Yasser Arafat had held the post until then.

"Children were exploited for these attacks," Yehiyeh said. Several of the bombers were teen-agers.

During nearly two years of Palestinian-Israeli fighting, more than 250 Israelis have been killed in more than 70 suicide attacks, most of them in Israeli cities.

Arafat has on occasion spoken out against suicide bombings, though Israel says he has encouraged violence against Israeli civilians.

Palestinian intellectuals recently published a statement calling for a halt to bombings, saying they harm the Palestinian cause. However, polls indicate that a majority of Palestinians continue to support attacks on Israelis, as a way of settling scores for Israeli military strikes against them.

Yehiyeh has been meeting with leaders of Palestinian groups to persuade them to accept a plan he worked out with Israeli Defense Minister Binyamin Ben-Eliezer, aimed at easing crippling Israeli restrictions in the West Bank.

Under the plan, Israel was to turn security control over the West Bank town of Bethlehem and the Gaza Strip over to the Palestinians, as a test case. If the Palestinians prevented terror attacks, Israel pledged to loosen its grip on the rest of the West Bank. The Bethlehem handover took place Aug. 20, but there has been no movement in Gaza, and the two sides blame each other for the delay.

Hamas and other extremist groups rejected the plan and pledged to continue their attacks against Israel. After an Israeli tank fired shells at a Bedouin encampment near a Jewish settlement in Gaza early Thursday, killing a mother, two of her sons and another relative, militants threatened revenge.

"We will retaliate against the criminals, civilian and non-civilian," said Hamas spokesman Mahmoud Zahar, adding that the military wing of the Islamic group "will do its best to take the proper retaliation to stop more killing on the Palestinian side."

Israeli Police Commissioner Shlomo Aharonishki warned that the three-week lull in Palestinian attacks does not mean the Palestinians have changed their tactics. In an interview published Friday, he told the Maariv daily that the lull was a result of successful Israeli anti-terror operations.

" I don't see fatigue among the Palestinians, and I don't perceive less motivation to carry out terror attacks," he said.

In the West Bank city of Nablus, Israeli troops left the main government building after blowing up the part where the governor, Mahmoud Aloul, had his office. Aloul said there were no explosives in the building, which was almost empty because of an Israeli army curfew in the city.

The Israeli army refused to comment, and military sources, speaking on condition of anonymity, would say only that soldiers searched the building for explosives and suspects as part of the Israeli military's routine operations in the city.