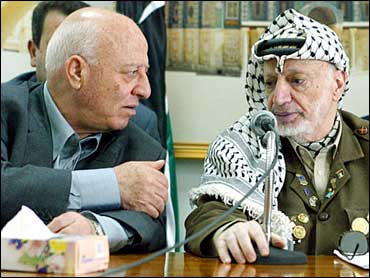 Qureia himself, however, said he had not yet given his final word. "I'm still studying the issue," he said Monday evening.

Qureia still must be formally confirmed by the Palestinian parliament, which is expected to convene in coming days.

Qureia was asked by Arafat on Sunday to replace Mahmoud Abbas, who resigned a day earlier after four turbulent months on the job during which he repeated wrangled with Arafat over his authority and over Cabinet nominations.

On Monday night, after meeting with Qureia, Arafat told the executive committee of his Fatah Party that Qureia had formally accepted the nomination, said the unidentified Palestinian official.

Earlier in the day, Qureia said that he would only accept the position if he had guarantees that Israel would comply with its obligations under the "road map" peace plan. Abbas had said Israel's non-compliance, along with a lack of internal support, had made his job impossible.

Qureia had told American news agencies that he does not want to set himself up for failure, an apparent reference to outgoing Prime Minister Mahmoud Abbas, who resigned over the weekend after just four months in office that were marred by wrangling with veteran leader Yasser Arafat.

The Bush administration, meanwhile, is making clear to Yasser Arafat and others in the Palestinian Authority that it wants the next Palestinian prime minister to have the political and security muscle to crack down on terrorist groups.

CBS News Correspondent Mark Knoller reports the White House insists the U.S. is staying out of the Palestinian prime minister selection process but it says the person holding the post should "be empowered to crack down on terrorists." Spokesman Scott McClellan says it is critical for the new Palestinian cabinet to press for reforms and to fight terrorism.

But the administration is also delivering a message to Israel that it, too, has obligations under a road map for peacemaking. Secretary of State Colin Powell telephoned Israeli Foreign Minister Silvan Shalom over the weekend to assess the situation.

But a U.S. official, speaking on condition of anonymity, said it was difficult for Israel to meet its commitments under the proposed road map amid another surge of terror.

Qureia is seen in Israel as a moderate who's played a leading role in peace talks, reports CBS News Correspondent Robert Berger, but Israel has not commented on his appointment.

Right wing Israeli legislator Yuval Shteinitz said Qureia is part of a Palestinian regime whose policy is "to enable terrorist organizations to draft people, to open offices, to smuggle weapons."

Shteinitz said Qureia is just a rubber stamp for Yasser Arafat's ongoing war of terror against Israel, and Israel has said it won't deal with a government controlled by Arafat.

Qureia said Monday that he wants to improve the lives of Palestinians who have largely been confined to their communities by a network of Israeli military barriers during the past three years of fighting. "I want to see what kind of change on the ground the Israelis will make, what kind of support from the United States in this regard (I will get)," he said.

Qureia also said he would not be able to govern without Arafat's support, and said Israel must change its approach to Arafat. Israel and the United States want to sideline Arafat, who has been confined to his West Bank headquarters by Israeli sieges and threats.

Qureia said he wants real support from the international community, "practical, not by words," echoing complaints by Abbas who said, in listing the reasons for his resignation, that the United States has not done enough to enforce Israeli compliance with the peace plan.

The 79-page report by the human rights group details the impact of military restrictions on the movement of Palestinians nearly three years into fighting that has heightened Israel's emphasis on shielding itself from would-be attackers.

Abbas' departure dealt a serious blow to the U.S.-backed "road map" plan for establishing a Palestinian state by 2005. But Palestinian Foreign Minister Nabil Shaath said the "peace process did not die and the principles (of the road map) we had agreed upon are acceptable to everybody."

Qureia has long been the No. 3 leader in Fatah, after Arafat and Abbas. Seen as a moderate and a pragmatist, he was a key player in the secret talks that led to the 1993 Oslo accords, which led to Palestinian autonomy in the West Bank and Gaza. He also led the Palestinians in negotiations with Israel in the following years.

The 65-year-old politician is considered one of the few Palestinians who have credibility with Israel but also count on the important support of Arafat.