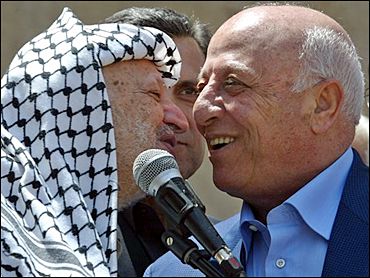 "The president refused my resignation and I will comply," Qureia told a news conference in the West Bank City of Ramallah.

The two men emerged from a meeting in Ramallah, kissing each other on the cheeks and clasping and holding up their hands together.

Qureia's resignation two weeks ago coincided with a wave of kidnappings, riots and calls for reform that plunged Palestinian politics into turmoil.

Arafat reportedly offered Qureia more say in running the Palestinian Authority in exchange for staying on.

However, Qureia denied that he and Arafat agreed on granting the prime minister more authority over the all important Palestinian security apparatus.

"I'm not going to bargain with the president about authority over the security branches," Qureia said. "We have enough powers over them as it stands."

Meanwhile, Jerusalem's police chief has decided to close a holy site to non-Muslim visitors, just as a Jewish holiday began.

Police chief Ilan Franco had warned the Israeli cabinet that Jewish militants could try to attack the Mosque of Al Aksa, which Jews call the Temple Mount. It's Islam's third holiest shrine.

Officials fear that an attack on the mosque could spark a Moslem holy war against Israel, reports CBS News Correspondent Robert Berger.

The Jewish fast day of Tisha Be'av, which began Tuesday evening, marks the destruction of the ancient temples at the site, and the decision to close the Temple Mount to Jews as the fast day began was called disgraceful by ultra-nationalist Israelis.

"This is a total retreat from our sovereignty over the Temple Mount and another dishonor to the Jewish Nation by a weak leadership that does not understand the significance of the hour," Gershon Solomon of the Temple Mount Faithful group said.

The site is scheduled for full access on Wednesday.

Also Tuesday, an Israeli newspaper reported that the head of Israeli military intelligence has warned the country's leaders that the Lebanese guerrilla group Hezbollah can launch missiles at Tel Aviv, considerably farther than previously thought.

The Haaretz newspaper said Maj. Gen. Aharon Zeevi-Farkash told a Cabinet meeting Sunday that Hezbollah has several dozen rockets with a range of between 73 and 126 miles. The distance from Hezbollah strongholds in southern Lebanon to central Tel Aviv is about 76 miles.

A government spokesman could not confirm Zeevi-Farkash's remarks.

Qureia's decision to remain in office ends the stalemate between the prime minister and Arafat that called into question Arafat's ability to rein in dissident elements of his ruling Fatah movement.

Fatah rebels had called for an overhaul of the Palestinian security forces, including the replacement of Arafat's disliked cousin, Moussa Arafat, as head of security in the Gaza Strip.

In his comments, Qureia made no reference to any security overhaul.

However, Hassan Abu Libdeh, General Secretary of the Cabinet, said Arafat and Qureia had agreed to grant more power to officials overseeing the security forces.