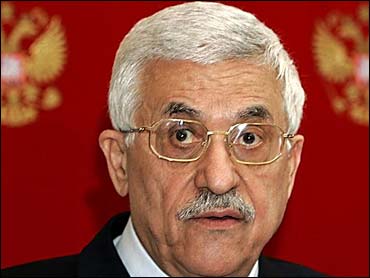 With a week to go before Israel's withdrawal from the Gaza Strip, Palestinian leader Mahmoud Abbas warned his people Tuesday that attacks during the pullout would harm their chances for independence.

He also reassured Hamas rivals that long-overdue parliamentary elections will be held in January, although he did not set an exact date.

"There is a requirement to ensure the withdrawal takes place in a civilized manner," Abbas told Palestinian legislators in Gaza City. "We will be able to show the world we deserve independence and freedom."

Later Tuesday, Israeli and Palestinian officials reached agreement on the disposal of rubble from the Jewish settlements that will be destroyed — a crucial point of coordination. Abbas was to announce on Wednesday whether he accepts the agreement.

Israeli and Palestinian officials working to coordinate the withdrawal agreed that Israel will take in dangerous rubble, including asbestos, while the Palestinians will remove the rest. Israel is to fund the Palestinian part, but the World Bank will administer the money.

International envoy James Wolfensohn, an American, participated in the meeting and was to report on its results to President Bush.

Abbas told his parliament that Palestinian behavior during the pullout will determine how the world perceives their ability to run their own affairs. Violent groups like Hamas want to show they are driving the Israelis out by force, but Abbas wants a smooth handover.

He also promised to hold long-delayed parliamentary elections in January as a gesture to the militants.

Hamas, which is entering candidates for the first time and hopes to build on recent victories in local elections, has harshly criticized Abbas' decision to postpone the parliamentary vote, originally set for July 17.

In his speech before Parliament, Abbas' main focus was on easing the way for Israel to exit the coastal territory. Israel plans to remove all 21 settlements, with about 8,500 residents, and has warned of harsh reprisals in response to Palestinian attacks during the withdrawal.

Abbas warned against looting after the withdrawal, saying the land on which the settlements were built belongs to all Palestinians.

He also cautioned against excessive celebrations because the pullout falls far short of the Palestinian goal of full independence in Gaza, the West Bank and east Jerusalem.

"The Israelis are still occupying our land. The road is still long ahead," he said.

He used especially tough language against militants, who have continued to fire rockets and carry out other attacks despite a six-month cease-fire with Israel.

Abbas said the attacks have only brought misery to the Palestinians — either by inadvertently hitting them or by prompting Israeli reprisals. He said he expects militants to give up their weapons after the Israeli withdrawal.

"The presence of the gunmen in the streets must end. The Palestinian Authority must be the only authority," he said.

But even as he spoke, hundreds of gunmen affiliated with Fatah demonstrated outside the building. The militants demanded the dismissal of the Palestinian finance minister, who has tightened control over spending, and assurances of jobs and safety after the withdrawal.

The protest ended without incident, but reflected continuing lawlessness.

Israel, meanwhile, took a step toward preparing for the removal of four small West Bank settlements as part of the "disengagement" plan, closing part of the northern territory to Israeli civilians to keep opponents of the withdrawal out of the area.

The military said the order includes a main checkpoint and two of the four settlements slated for evacuation.

The decision came in response to plans by hard-liners to hold a large demonstration in the area and no decision had been made on how long the closure would last, the army said. It already has turned Gaza into a closed military zone, barring nonresidents from entering.

Israeli hard-liners' objections to the pullout also continued to crystallize, with lawmaker Uzi Landau, a leading opponent of the plan, announcing Tuesday he would challenge Prime Minister Ariel Sharon for leadership of the ruling Likud Party.

Landau's candidacy was viewed as a longshot, but his announcement was another sign that the party could split over the Gaza pullout. Earlier this week, Likud hard-liner Benjamin Netanyahu resigned as finance minister in an apparent bid to wrest control of the party from Sharon. On Tuesday, the government approved the appointment of Vice Premier Ehud Olmert, a close Sharon ally, as the new finance minister.