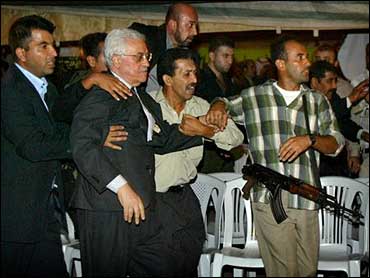 The interim Palestinian leader, Mahmoud Abbas, has asked militants to halt violence during the campaign for Jan. 9 presidential elections, a participant in truce talks said Tuesday.

Abbas is trying to work out a deal with rival Palestinian groups on a ceasefire and possible power sharing ahead of the vote to elect a successor to Yasser Arafat, who died in a Paris hospital last week.

He held a joint meeting with representatives of 13 factions Monday, and was holding separate talks with them Tuesday, including with Hamas, the main opposition group and the main militant group carrying out anti-Israel attacks.

Ziad Abu Amr, a lawmaker participating in the talks, said Hamas and Islamic Jihad have asked Abbas to establish a "unified leadership," an umbrella group that would give the militants a role in decisions, at least until the elections.

Hamas and Islamic Jihad hope that such a leadership body will allow them to influence decisions, even though they apparently will not compete in the presidential vote. The groups never explained how power would be distributed in such a body.

Abbas appeared to be cold to the idea.

Abu Amr said Abbas told the opposition groups "the best way to achieve a political partnership is elections." In agreeing to a new leadership body, Abbas would have given away significant powers.

On the other hand, Abbas needs the support of the Islamic militants to govern and will be forced to make some concessions. As possible compensation, Abbas said an effort would be made to hold legislative and municipal elections four or five months after the presidential vote.

The opposition groups hope for a strong showing in legislative and municipal elections. Four years of Israeli-Palestinian fighting have strengthened Hamas, which is believed to have drawn even with Arafat's once dominant Fatah in popular support.

Abbas also asked the factions to halt violence during the election campaign.

"He said the elections need security, stability and quiet," Abu Amr said. "There is no possibility to conduct the elections while we are in a situation of war and conflict."

Hamas, Islamic Jihad and Fatah have carried out hundreds of shooting and bombing attacks since fighting with Israel broke out in 2000.

Abu Amr said that even though the opposition groups would not field a candidate for the presidential elections, they would not call for a boycott either. In the previous vote in 1996, Islamic militants urged their supporters not to participate because the election was a result of interim peace agreements with Israel.

The Palestinian leadership is also trying to control internal violence.

On Sunday, gunmen opened fire, mostly in the air, just moments after Abbas and Gaza strongman Mohammed Dahlan arrived at a mourning tent for Arafat in Gaza City. Two security guards were killed in the incident.

Dahlan said the identities of the gunmen were known, and that measures would be taken against them. He refused to elaborate.

Dahlan, once seen as a possible successor to Arafat, also said he will not run for president and instead endorsed Abbas, the main contender.

Abbas, 69, is part of the old guard and has little popular support. However, the old guard still controls the movement's decision-making bodies, and it is likely he will get the Fatah nomination.

Abbas' biggest challenge would come from Marwan Barghouti, 45, a former Fatah leader in the West Bank who is currently serving a life sentence in an Israeli prison for masterminding attacks on Israelis. Barghouti, according to polls the most popular politician after Arafat, is planning to run, sources close to Barghouti said.

Palestinian billionaire Monib al-Masri, 66, is also considering a bid. However, Al-Masri has little political clout and is not connected to any factions. Another outside candidate is Abdel Sattar Qassem, a political science professor. Known for his fierce criticism of Arafat and his corrupt regime, Qassem holds militant views on Israel.

Meanwhile, EU members are seeking ways to ensure the Jan. 9 election is a success. A British diplomat, speaking on condition of anonymity, said Britain is paying for an adviser to help the Palestinians set up the elections.

In other developments, Qureia said he formally asked France to hand over Arafat's medical records. Arafat was airlifted to a French military hospital Oct. 29 and died there Nov. 11. During that time, his wife, Suha, tightly controlled access.

French Foreign Ministry officials said that under French law, only family members have access to medical records. However, the law does not limit access to immediate family members, the officials said. This means that perhaps Nasser al-Kidwa, a Palestinian Authority official and Arafat's nephew, could see the file.

French doctors never revealed the cause of Arafat's death, which remains a subject of intense speculation. Arafat's long-time personal physician, who did not participate in his treatment in Paris, said it was possible Arafat was poisoned, though Palestinians officials said they had nothing to back up such a claim.