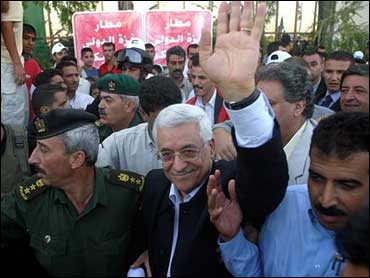 The elections were to have been held in July, but were postponed indefinitely because of Israel's Gaza pullout. In setting a firm date, Abbas was making a conciliatory gesture to his political rival, Hamas, which is expected to make a strong showing in the vote.

"The parliamentary election will take place in all of the homeland districts on Wednesday, Jan. 25, 2006," Abbas told a "model parliament" of high school students in Gaza City on Saturday.

Abbas also signed a decree that gives his government control over all lands and assets left behind by Israeli troops and settlers.

The decree said no one can make personal use of the real estate until ownership has been distributed.

On Friday, Abbas promised freedom, jobs and homes for the people of Gaza once Israel completes its pullout. Hours before he spoke at Gaza's abandoned airport, an Israeli bulldozer demolished the first Jewish settlement, clearing land for Palestinian development.

In the settlement of Gadid, Israeli troops expelled the last settlers holed up in a synagogue, crashing through a flaming barricade of cars, wooden planks and garbage bins.

Then, Israel suspended evicting settlers for the Jewish Sabbath, having evacuated 87 percent of Gaza's settlers in just 2 1/2 days. All but four settlements were vacant.

Smiling and waving to a cheering crowd at the closed Gaza International Airport, Abbas said Israel's departure was bringing "historic days of joy" to the Palestinians.

In his first major speech since Israel began pulling out on Monday, he promised that the airport, whose runways were destroyed by Israel in fighting in 2000, would again become a gateway for Palestinians, though that will require Israel's blessing.

Abbas also pledged the Palestinian Authority would rebuild homes demolished by Israel during the past five years of conflict. He promised to reserve 5 percent of government jobs for the disabled, mainly war-wounded.

He told the crowd that Israel was quitting Gaza because of Palestinian "sacrifices" and "patience," and he promised the withdrawal would lead to further pullouts from the West Bank and Jerusalem.

Earlier, hundreds of Palestinians from the town of Rafah offered prayers of thanks in sandy open ground within sight of two deserted settlements, celebrating the coming return of land, captured by Israel in the 1967 Mideast war, that became home to 8,500 Jewish settlers.

"We won, so we came to thank God for our victory," said Abdel Raouf Barbar, an official of Abbas's Fatah party. With parliamentary elections scheduled in January, the party is competing with the Islamic group Hamas to claim credit for the Israeli withdrawal.

On Friday, two Hamas militants were wounded when an explosive device they were carrying accidentally blew up before they could plant it near the evacuated Kfar Darom settlement, Palestinian officials said.

The extent of their injuries was unknown, said the security officials, who cannot be identified because they are not authorized to speak to the media. The militants apparently wanted to target Israeli troops still guarding the emptied settlement to bolster Hamas claims of having driven the Israelis from Gaza.

A bulldozer crushed flimsy caravan homes in the first demolition of an abandoned Jewish settlement, and the army prepared to complete the anguishing task of uprooting the last Israelis from Gaza next week before moving on to evacuations in the West Bank.

In quiet consultations with the United States and the Palestinians, Israel decided to demolish the private homes, many of them single-family villas, and to leave most public buildings intact. Palestinians, who plan high-rise housing units in place of the villas, will be able to use the construction rubble to build a seaport and other projects.

The first demolition was at Kerem Atzmona, an illegal outpost within view of the Mediterranean. The massive shovel of a yellow excavator flattened about 20 homes with just a few blows to each. Cranes lifted bomb shelters, concrete boxes with thick metal doors onto a flatbed truck to be hauled away and recycled.

In Gadid, the 17th of Gaza's 21 settlements to be evacuated, protesters set up a flaming barricade at the gate when the army arrived shortly after dawn. They hurled stones and paint-filled light bulbs toward the troops. A military bulldozer cleared the burning debris, and forces quickly fanned through the settlement.

Troops rounded up holdouts who climbed atop the roofs of homes and shouted insults. Protesters taking refuge in the synagogue agreed not to resist with force. Police moved into the building and carried sobbing protesters away into waiting buses.

The last four settlements were expected to be emptied by Tuesday, allowing the military to turn its attention midweek to the northern West Bank, the heart of biblical Israel for religious Jews and where authorities expect even more impassioned resistance than in Gaza.

Since Wednesday when the forced evictions began, security forces detained nearly 950 protesters. On Friday, 245 were still in jail in the southern Israeli town of Beersheva, police said.

Yet most of the operation was unexpectedly swift and smooth, amid scenes of pathos and despair as people were forced to abandon homes and farms they lived in for as long as 30 years.

Violent resistance to the pullout peaked on Thursday when protesters, mostly ultra-nationalists from outside Gaza, made a last stand in the synagogues of Neve Dekalim and Kfar Darom and defied orders to leave.

Dozens of police and army were injured by caustic liquid, apparently paint thinner, or by exploding light bulbs filled with paint and other objects hurled at them from protesters on the roof at Kfar Darom. About 20 demonstrators were injured.

Prime Minister Ariel Sharon, the settlers' former patron who became the architect of the Gaza pullout, said the violence infuriated him.

Sharon had said he was reduced to tears watching images of settlers losing their homes. But after seeing what happened at Kfar Darom, he told the Haaretz daily "my mood altered and the pain turned to rage."

In another interview, with the Yediot Ahronot newspaper, Sharon said he has no plans to uproot any more Jewish settlements in the near future. He said peacemaking would be based on the U.S.-backed "road map" peace plan, which calls for a negotiated settlement with the Palestinians.