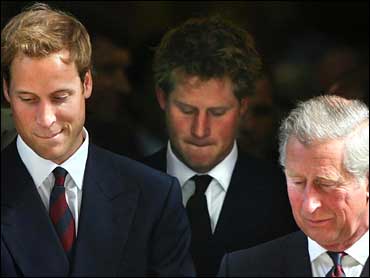 It's being billed as another stunning revelation about Prince William.

But, reports CBS News Correspondent Mark Phillips, nobody's quite sure what it amounts to.

The "it" is a report in the Britain newspaper Mail on Sunday suggesting that twenty-seven year old Prince William is being readied to overtake his father, Prince Charles, as the future torchbearer of Britain's royal family, as king.

The report is being dismissed as "nonsense" by a spokesperson for the royal family.

But, says Mail on Sunday columnist Katie Nicholl, "It's been in my experience in eight years of reporting (on the royals) that the stories often denied are the ones that really have a gravitas of truth about them."

William is, Phillips observes, still a prince in search of a role and, the story goes, William's grandparents, Queen Elizabeth and Prince Philip, are slowing down.

"There are all sorts of suggestions about the queen's health," Nicholl told "Early Show" co-anchor Harry Smith Monday. "The other week, she opened Parliament, and a lot of commentators noticed that she looked frail. Phillip hasn't been very well. The queen is 83. Phillip is 88. Realistically, there's only is certain amount that they can do in terms of official engagements and royal duties. It seems to all of us here absolutely normal and plausible that she should be handing over power, which is exactly what's going on."

So William, who's already scheduled to represent the Queen on an upcoming trip to Australia and New Zealand, is supposedly being groomed to take on more of the burden.

This, at the expense of Charles and of William's stepmother, Camilla. Charles, the newspaper indicates, is less trusted by the palace because he doesn't have William's star power and Camilla lacks the stamina for the rough-and-tumble of royal celebrity.

"Prince Charles and Camilla are not going to have the same cache for magazines for interest in them," says royals-watcher Neil Sean.

The story of William's increasing profile inevitably fuels speculation that the palace would rather he be the next monarch than his father, a scenario repeatedly denied by anybody who actually knows anything about royal affairs, Phillips points out.

"I was told from my sources," Nicholl notes, "that the Queen sees that she has two substitutes, and she wants both of them (ready to come) off the bench. So, I think it's a little unfair to suggest that she's leapfrogging Charles.

"I do think Charles will be there, but Charles has his own interests. His interests are architecture, his interests are at home in Britain, it's climate change. The Queen's scope has to be far broader than that, and William is there, at a position in his life where he can come in and do these things. So really it would be madness for the Queen not bring him in."

Traditionally, the holiday season serves up royal stories like turkey, Phillips adds. There's always a big family get-together, and the matter of who's there and who isn't always makes news.

And, no, Phillips says, we don't officially know yet whether William's girlfriend, Kate Middleton, will be there, but frankly, it'll be a surprise if she isn't.