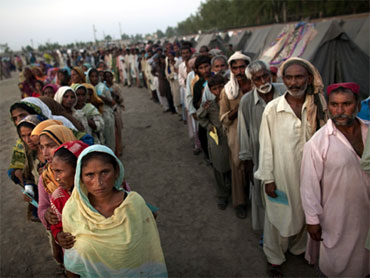 The floods tearing through Pakistan's breadbasket have further weakened this already unstable country, inflicting more economic pain on its people and threatening a key pillar of the U.S.-led war against Islamist militants - who stand to gain from the misery.

For now attention is focused on meeting the immediate needs of the millions of people affected by the still-spreading disaster. Yet the floods - described as Pakistan's worst-ever natural calamity - are already complicating U.S. goals of defeating al Qaeda and the Taliban and stabilizing neighboring Afghanistan.

With international aid still not coming in fast enough, public anger at the government is likely to swell as millions face months or even years of destitution, risking turmoil just as Washington and the region needs stability in the nuclear-armed state.

"The stakes are very, very high," said Sen. John Kerry, who visited this week. "We are particularly anxious, all of us, to see the country get back on track."

The floods began in the northwest, hitting the Swat Valley and areas close to the main city of Peshawar, before moving down the country by way of the mighty River Indus, devastating millions of acres (hectares) of crops in the country's "breadbasket" in Punjab and the Sindh.

About one-fifth of the country - a chunk of land about the size of Italy - has been affected.

At least 8 million people are in need of water, shelter or other emergency assistance, making the disaster larger than Pakistan's last two humanitarian crises, the exodus from Swat last year amid an army offensive against the Taliban and the 2005 Kashmir earthquake.

The country was already blighted by soaring food inflation, chronic unemployment, crumbling schools and hospitals and rolling power cuts across the country. About 60 percent of its 170 million get by on less than $2 a day. Last year, the economy was kept afloat by a $7.6 billion loan from the International Monetary Fund.

The floods are predicted to shave at least 1 percent of Pakistan's gross national product this year, in large part because of their effect on the country's agricultural sector, which accounts for about 20 percent of the economy. The country's textile industry is also expected to suffer because of damage to cotton crops.

Already, the prices of vegetables, meat and dairy products have risen sharply across the country.

"No country is set up to deal with this scale of potential loss in its agricultural sector," said Anthony Cordesman from the Center for Strategic and International Studies.

Looking after the victims is a huge task that would strain even the best government and international agencies. Authorities must also start thinking ahead to rebuilding homes and infrastructure such as roads and bridges, and getting people - most of them poor farmers - back to work.

"The government now has to tackle two things at the same time, the macroeconomic stability and the reconstruction effort," said Juan Miranda, the Asian Development Bank's director general for Central and West Asia. "I don't think any of us can envy the task ahead of them."

Historical precedents are hard to find for a disaster on this scale, but Pakistan has proved resilient in the past when faced with crisis. With committed government and the full support of the international community, some of the worst-case scenarios may not play out.

"The real issue is whether this (flooding) takes us into an entirely new realm for a country that a lot of people have said is near failure, or whether this is just an added burden," said Daniel Markey, a South Asia expert at the Council on Foreign Relations, in a posting on the organization's website. "That really is still up in the air."

The government - already unpopular before the floods struck - faces anger if it fails to help the victims in the coming weeks and months. Many are sleeping by the side of the road under makeshift shelters along with their salvaged possessions.

There have been sporadic protests, some violent, in or close to flood-affected areas.

"There is no electricity, no water, no sanitation, no food. The only thing there are in numbers is mosquitoes," said Mahboob Ali, who blocked a road Friday in protest at conditions in his relief camp in the northwest. "We cannot bear the screams of our children. They are hungry."

President Asif Ali Zardari, who heads the ruling party, has been the target of most of the criticism, especially since he traveled to Europe just as the disaster unfolded. The army has seen its reputation rise because of its high-profile role in the relief effort, but experts think the prospect of a military coup unlikely.

For now, the opposition has been largely quiet in its criticism of the handling of the relief effort and it is not whipping up anti-government sentiment. But that could change if the rebuilding effort is badly handled or allegations of corruption surface.

"The floods contribute to endemic instability," said a British government official who requested anonymity because of the sensitivity of his job. "The inability of the central government to deal with it could diminish its authority, which is cause for concern. This further complicates things."

Some of the worst-hit areas of the country are strongholds of al Qaeda, the Taliban and associated groups. As well as the northwest, the floods have devastated much of south Punjab, which extremist groups have long used as a recruiting ground, helped by the region's poverty.

As they have done in previous crises, Islamist charities, some with alleged links to militants, were the first on the scene, cooking food and giving shelter to the displaced. Their presence contrasted with the absence of help from the government.

U.S. and Pakistani officials have cautioned the extremists could get recruits and legitimacy by their actions in the flood zone and have used this argument to call for more international aid. Washington has been the most generous donor and deployed military helicopters to ferry aid and pick up the stranded.

"If the Pakistan government and the international community don't help these people, you will get the classic conditions that allow for insurgent groups to step into the role of providing what the government has not," said Adam Holloway, a Conservative lawmaker who sits on Britain's Defense Select Committee.

"If you're an insurgent group, you'll want to show people you care more about them than the government."

With the army taking the lead in flood relief, there has been less pressure on militants and a decreased willingness for any new campaigns against militants in the northwest. Major operations would mean a fresh influx of internally displaced people.

The U.S. needs Pakistan to keep pressure on militants in the northwest to stop Afghan insurgents using it as a base for regrouping and rearming. American officials have said sustained Pakistani action there is key to success in Afghanistan.

In particular, the flood appears to have dashed for now U.S. hopes for a sustained military effort in the tribal region of North Waziristan, from where a network of insurgents blamed for much of the violence in Afghanistan is believed to be based, analysts said.

"The militant organizations must be finding this situation a gift from God," said Dr Riffat Hussain, professor of Defense Studies at Quaid-e-Azam University.