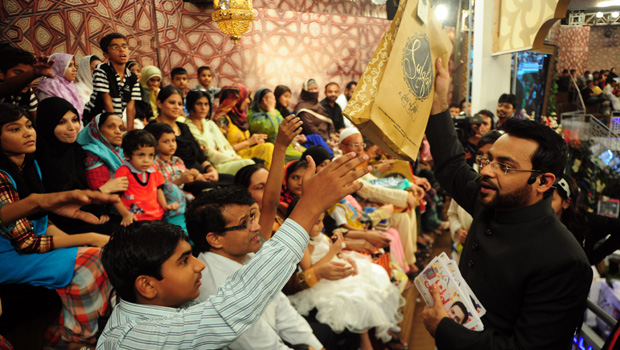 A Pakistani television talk show hosted by a Muslim preacher has a unique premise: giving away abandoned babies to childless couples.

The program has incited outrage and controversy, but host Aamir Liaquat Hussain insists he hasn't been exploiting the children to win the competitive TV ratings war during the Muslim month of Ramadan.

"It is not like parents come in the show, and (we) deliver the baby like a prize. What prize? It is rubbish to say, "'Who wants to win a baby?'" Hussain told Agence France-Presse.

Hussain, a Muslim preacher-turned-television star, hosts the 12-hour show every day during Ramadan and racks up big ratings. It has celebrity interviews, and games in which he gives away prizes like cell phones and motorcycles to audience members who answer questions right about Islam.

It wasn't until the past two weeks he began handing out baby girls, according to the AFP.

The baby giveaway is done in conjunction with the Chhipa Welfare Association, a charity that rescues abandoned children, often found on the street or even in garbage dumps.

"If we didn't find this baby, a cat or a dog would have eaten it," Hussain said during one broadcast, according to Reuters.

Critics accuse the show of presenting children as trophies in an effort to boost ratings, but Hussain and Ramzan Chhipa, head of the Chhipa Welfare Association, insist they are practicing Islam by helping and inspiring others.

"We give adoption to those couples only on merit basis," Chippha told the AFP.

"It is not, 'You answer a question on a show and you get a baby.' This is false," he added.

Pakistan does not have laws concerning adoption, although the chosen parents  have to apply for guardianship in family court.