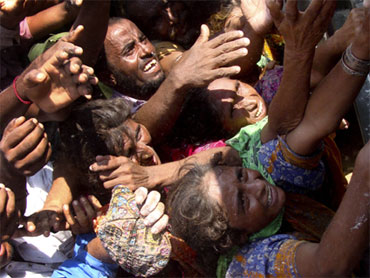 The Pakistani Taliban has urged the government not to accept any foreign aid for victims of the worst flooding in the country's history.

Spokesman Azam Tariq told an Associated Press reporter Tuesday that the Taliban would themselves provide money if the government stopped accepting international help.

"Pakistan should reject this aid to maintain sovereignty and independence," Tariq said in a telephone call to an Associated Press reporter.

The Taliban has often attacked foreign aid groups, which they say serve a Western agenda.

Meanwhile, President Asif Ali Zardari returned Tuesday to flood-ravaged Pakistan, where he faced a storm of criticism for visiting Europe as his country was gripped by what his government called the nation's worst natural disaster.

His arrival came as thousands fled a major city in central Pakistan threatened by swollen rivers, and as the United Nations said the nationwide aid response needed to be scaled up "massively." The world body says it is working on a response plan that will likely require hundreds of millions of dollars in initial international assistance.

The U.N., relying on Pakistani figures, says the number of people affected by flooding over the past two weeks is 13.8 million - more than the combined total of the 2004 Indian Ocean tsunami, the 2005 Kashmir earthquake and the 2010 Haiti earthquake, although the death toll in each of those disasters was much higher than the 1,500 people killed in the floods.

The widespread crisis has overwhelmed the government and frustrated citizens who have complained about slow or non-existent aid efforts. A person is considered "affected" by the floods if he or she will need some form of assistance to recover, either short-term humanitarian aid or longer-term reconstruction help, the U.N. said.

Amid the relentless rains, Zardari - an unpopular figure to begin with - took off for a visit to France and Britain. His aides said he had to undertake the trip for diplomatic reasons, especially in the U.K., whose Prime Minister David Cameron had recently accused Pakistan of exporting terror.

But the timing of trip struck a raw nerve among many who said Zardari should have stayed with his suffering people - even though the president, fearful of assassination, rarely makes public appearances in Pakistan anyway. The criticism was particularly harsh after reports that he'd visited his family's elegant chateau in France.

Zardari returned first to the southern city of Karachi and was expected back in the capital, Islamabad, on Wednesday. He is set to meet with the chief ministers of the provinces to map out a rehabilitation program, said Fauzia Wahab, spokeswoman for the ruling Pakistan People's Party.

In Punjab province, the normally bustling city of Muzaffargarh looked largely deserted Tuesday after large numbers of people left following flood warnings the previous evening. Many men, however, stayed behind to guard homes and businesses.

"There is no doubt that our city is almost empty now," said Mohammed Saleem, 42, a shop owner who sent his wife and children to Multan city.

The local government hospital had staffing shortages because many doctors and other workers had decided to leave.

"We have put sandbags around our hospital to protect it from any possible floodwaters, but we do not know whether it will help," said Ashiq Malik, a hospital official.

The population of Muzaffargarh is around 250,000, said Hassan Iqbal, a senior government official in Dera Ghazi Khan district. The evacuation warning was issued only after authorities assessed that the floods could hit the city, Iqbal said.

"It may not happen, but there is a danger to the city," he told The Associated Press.

The U.N. estimates that immediate relief will require hundreds of millions of dollars, while longer-term reconstruction and rehabilitation will cost billions. It is still working on estimating what is needed from the international community, and says more than $100 million has been pledged already, including funds from the U.S.

Asked whether that response has been anemic, U.N. officials would only say they'd like to see more.

"Yes, we need to have more, and yes, the tempo needs to increase," said Martin Mogwanja, a top U.N. humanitarian official in Islamabad. The response "now needs to be scaled up, massively."

The hardest hit region has been the northwest, which also is the epicenter of Pakistan's fight against al Qaeda and the Taliban. But as swollen rivers have flown south and east, Sindh and Punjab provinces have also been affected.

Rescue work has been hampered by ongoing monsoon rains, which have washed away roads and bridges. Six U.S. helicopters sent from Afghanistan to assist in aid delivery and evacuations lost at least three days of flights because of the weather.

The floods hit the country at a time when the government is already struggling with a faltering economy and a brutal war against Taliban militants that has killed thousands of people. The patchy government response has given room for Islamist groups, some allegedly linked to militant outfits, to step in and offer their own aid to displaced and hungry flood victims.