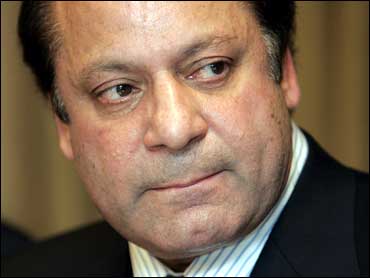 Former Prime Minister Nawaz Sharif lost his appeal against the rejection of his nomination for next month's parliamentary elections, an official said Tuesday, eliminating one of Pakistan's key opposition leaders from the crucial vote.

Dilshad declined to give details, confirming only a report in the Urdu-language Jang daily Tuesday that the Sharifs were out of the elections.

Sharif's party initially called for a boycott of the vote but decided against it after failing to muster support from other opposition groups for a united action.

Sharif, who has been campaigning for his Pakistan Muslim League-N party, has been demanding that President Pervez Musharraf restore Supreme Court judges he sacked during a 42-day state of emergency that he lifted over the weekend.

A coalition of anti-Musharraf groups, including Jamaat-e-Islam, Pakistan's largest Islamic party, said Tuesday it will go ahead with plans to boycott the vote, saying it will not be fair unless the judges are reinstated, "unconstitutional" steps Musharraf took under the emergency are revoked and he resigns.

Sharif's party described the rejection of his appeal as a politically motivated decision.

Other candidates objected to Sharif's nomination, citing charges against him relating to the 1999 coup by Musharraf that ousted his government and his alleged involvement in a corruption case.

Since his ouster, Sharif has lived in exile in Saudi Arabia and Britain. Like Benazir Bhutto, another two-time former prime minister, he has returned home to be involved in the elections.

Addressing thousands of supporters during an election campaign stop in Hyderabad, Bhutto on Monday sharply criticized the rule of Musharraf, who gave up his dual role as army chief last month, as a "dark era of dictatorship." She warned that a rigged vote could push the country into "anarchy."

"If the militancy spreads and if, God forbid, the country disintegrates, it would become another Afghanistan," Bhutto said.

Musharraf said curbing militancy was the chief reason he imposed a state of emergency on Nov. 3, though he used it to crack down on dissent and purge the judiciary in his favor.

Musharraf has promised that the elections will be free and transparent, and has said allegations of rigging were an attempt by the opposition to create an excuse in case they fare poorly at the ballot box.