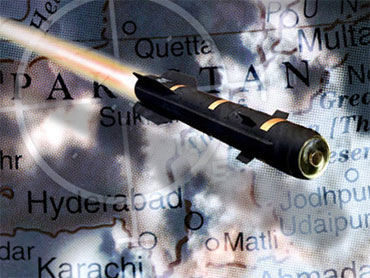 The attacks on Monday came soon after U.S. Sen. John Kerry concluded talks in Islamabad on how to salvage a relationship brought to a low point over the unilateral raid on Osama bin Laden on May 2.

Two Pakistani intelligence officials said missiles hit a house and a vehicle near Mir Ali in North Waziristan district. They spoke on anonymity because they were not authorized to give their names to reporters.

Kerry is the most high-profile American emissary to visit Pakistan since the May 2 raid in the northwest garrison city of Abbottabad, Pakistan, which killed the al Qaeda chief and four others. His comments during the visit mixed defiance with promises to work to rebuild the relationship between the two countries.

Kerry, who chairs the U.S. Senate's Foreign Relations Committee, said he understood why Pakistanis were upset at the American raid, but emphasized "the extraordinary circumstances behind the mission against bin Laden."

"When I spoke with the leaders of Pakistan last night and today, I explained that the extreme secrecy surrounding every aspect of the raid in Abbottabad was essential to protecting the lives of the professionals who were involved and ensuring they succeeded in capturing or killing the man responsible for so much death in so many places," said Kerry.