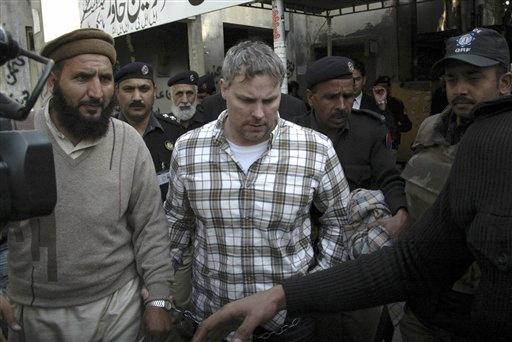 ISLAMABAD (AP) - An American who shot dead two Pakistanis tells police he's a consultant for the U.S. consular general in Lahore and pleads with them to find his passport, according to footage purportedly showing his encounter with security officials soon after the late January shootout.

The clip first aired Wednesday night by the private Dunya television channel could deepen the mystery surrounding what's become a major diplomatic dispute between the United States and Pakistan, whose alliance is considered key to success in the war in Afghanistan.

The U.S. has demanded that Pakistan release the American, saying he has diplomatic immunity and shot the armed Pakistanis in self-defense on Jan. 27 in Lahore because they came up to his car and tried to rob him. To pressure Pakistan for his release, the U.S. has begun curbing contacts with Pakistani leaders and lawmakers have even threatened to cut off billions in aid to the nuclear-armed Muslim nation.

Pakistani leaders, eager to avoid a backlash among a population where anti-Americanism is rife, have avoided definitive statements on the status of the American, whom they've identified as Raymond Allen Davis, and say the matter is up to the courts. Davis faces potential murder charges, and his next court appearance is set for Friday.

The brief footage was apparently shot by a cell phone lying on a table in a room at a police station in Lahore. The authenticity of the video could not be independently verified and the faces that appear are darkened. But Davis' face is somewhat visible and it matches pictures taken of him after the incident.

Speaking in a clear American accent, with a slight Southern twang, Davis says at one point he's with the U.S. Embassy, which is in Islamabad, but also says later that he's doing consulting work for the consular general, who is based in the U.S. consulate in Lahore. He also says he's with the "RAO," an apparent reference to the Americans' Regional Affairs Office.

He shows police multiple identification badges around his neck, some of which he says are old. Police read his name out as Raymond Davis and he doesn't deny that. He says that after the police first caught him he showed an officer his passport but the document has since gone missing and he needs police to help find it, possibly by searching his car.

The police speak mostly in Urdu and Punjabi among themselves, and at one point offer him water but joke that he'd have to pay for it.

Dunya also showed pictures allegedly found in a camera confiscated from Davis. The photos appeared to include government and police offices and areas near the Indian border, and could fuel suspicions about why Davis would have taken them.

Exactly what sort of work Davis does for the U.S. is a major issue because it could affect Pakistani determinations about his diplomatic immunity.

U.S. officials on Thursday declined to comment on the clip, but insisted that Davis' specific assignments at any given time did not detract from the fact that he was officially an American Embassy employee who was considered part of the "administrative and technical staff."

That designation gives him blanket immunity and makes it illegal under international agreements for Pakistan to even detain him, the U.S. says.

There has also been controversy in Pakistan over the fact that Davis was armed. A senior U.S. official has told The Associated Press that Davis was authorized by the United States to carry a weapon, but that it was a "gray area" whether Pakistani law permitted him to do so.

According to records from the Pentagon, the 36-year-old Davis is a former Special Forces soldier who left the army in August 2003 after 10 years of service. A Virginia native, he served with infantry divisions prior to joining the 3rd Special Forces Group in Fort Bragg, North Carolina.

In 1994, he was part of the U.N. peacekeeping force in Macedonia. His record includes several awards and medals, including for good conduct.

Public records also show Davis runs a company with his wife registered in Las Vegas called Hyperion Protective Services, though it was not immediately clear whether the company has had many contracts with the U.S. government.

The U.S. Embassy says he has a diplomatic passport and a visa valid through June 2012. It also said in a recent statement that the U.S. had notified the Pakistani government of Davis' assignment more than a year ago.

After the shootings in Lahore on Jan. 27, Davis called for backup. The American car rushing to the scene hit a third Pakistani, a bystander, who later died. The U.S. has said nothing about the Americans involved in that third death, though Pakistani police have said they want to question them as well.