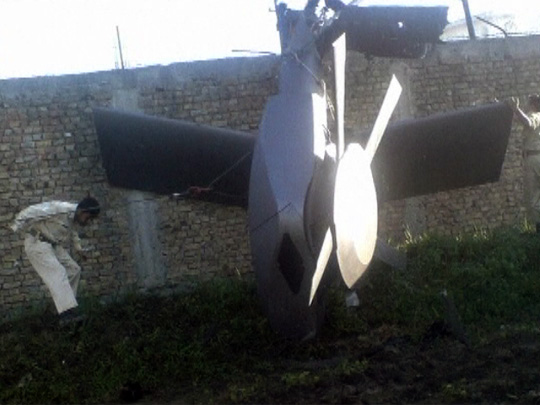 ISLAMABAD - Speaking in the capital where he was meeting with Pakistani officials, Sen. John Kerry announced that Pakistan has agreed to return the tail of a stealth U.S. helicopter that American commandos had to destroy and leave behind in the raid that killed Osama bin Laden.

One of the Black Hawks flown by an elite Army unit called Task Force 160 - which carried the Navy SEAL commandos - lost lift and was forced into a hard landing at Osama bin Laden's compound in Abbotabad. The pilot nudged the Black Hawk forward into a controlled crash - saving the mission from disaster, but sheering off the helicopter's tail section, CBS News national security correspondent David Martin reported.

Pictures of the tail section left behind indicated the Black Hawk had been modified with stealth technology.

Bill Sweetman, Editor in Chief for Defense Technology for Aviation Week, told "The Early Show" that some unusual features were spotted in the wreckage, including special materials covering the tail rotor hub to reduce the helicopter's radar signature, and extra rotor blades to make it quieter.

"At a range of a couple hundred feet even, if you've got a bit of urban background noise, you're not going to hear it," said Sweetman.

Aviation Week published photos of the tail section which showed stealth-configured shapes on the boom and tip fairings, swept stabilizers, and a silver-loaded infra-red suppression finish.

The commandos destroyed the helicopter following the crash so that it could not be salvaged, but the Pentagon later asked Pakistan for the sensitive materials to be returned.

Kerry, chair of the Senate Foreign Relations Committee, is the most high-profile American emissary to visit Pakistan since the raid earlier this month on the northwest garrison city of Abbottabad, Pakistan, where the al Qaeda chief and four others were killed by a team of Navy SEALs.