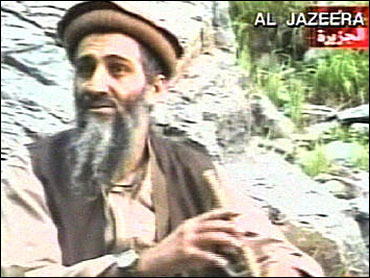 Pakistani forces backed by helicopters on Tuesday swept through villages in a remote border region where Osama bin Laden is believed to be hiding in an operation to capture fugitive al Qaeda and Taliban suspects.

Two intelligence officials, speaking on condition of anonymity, said that at least two homes were leveled and as many as 20 people had been taken into custody, including three foreign women. Authorities were not immediately available to confirm the reports.

The searches near the town of Wana, just a few miles from the border with Afghanistan, began after dawn, as paramilitary and army troops moved into areas where the fugitives are believed to have taken refuge among local tribes.

"An operation has begun near Wana," said Pakistani Information Minister Sheikh Rashid Ahmed. "That's all that I can tell you."

People in Wana reported hearing explosions and gunshots throughout the morning.

"We have heard 25 to 30 explosions. The shooting started in the morning and it's continuing," said Shahzad Wazir, a resident in Wana.

Foreigners are not allowed to travel to the tribal region without government permission and an armed escort. The army said it had no plans to take journalists to the region, and the army on Tuesday turned away several Pakistani reporters who tried to travel there.

The operation, which included more than a dozen helicopter gunships, began in the village of Zarkai, a village in Pakistan's strategic South Waziristan tribal region. It is located about 190 miles west of Pakistan's capital, Islamabad.

Intelligence officials have long believed that the Saudi fugitive has been hiding in the rugged mountains between Pakistan and Afghanistan, though there has been no hard evidence of his whereabouts for nearly two years.

The sweep comes weeks after CIA director George Tenet made a secret trip to Pakistan to discuss the hunt for bin Laden as well as ways to fight nuclear proliferation, intelligence officials said.

Pakistan denies that any American troops are involved in operations on their soil, though local residents have in the past said they have seen what they believed to be U.S. special forces troops in the region.

In recent days, Pakistan stepped up security in the regions and received assurances that foreign nationals had been expelled by area tribes, said Mohammed Azam Khan, a local official.

The government had set Feb. 20 as the deadline for tribal elders to hand over al Qaeda fugitives and their supporters. So far, about 58 suspects have been turned over, though another 38 are still being sought.

Pakistan's government has limited authority in the tribal lands, but has been expanding its role under U.S. pressure to crack down on terrorism since the Sept. 11, 2001 attacks on the United States. However, under a centuries-old custom called "collective responsibility," the government can punish an entire tribe if any of its members are suspected of harboring lawbreakers.

Foreign Minister Khursheed Kasuri said Monday that any top al Qaeda fugitives wanted in the United States would be handed over. However, President Gen. Pervez Musharraf has assured tribal elders that suspects who turn over their weapons and surrender would not be extradited.