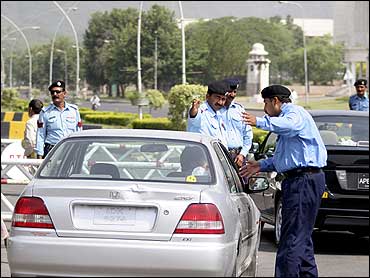 Authorities tightened security Friday near the enclave where most foreign diplomatic missions in Islamabad are located.

The U.S. Embassy strongly advised Americans to limit nonessential movement in the city and nearby Rawalpindi.

An Internet posting Thursday, purportedly from al Qaeda in Afghanistan, claimed responsibility for Monday's bombing outside the Danish Embassy that killed six people.

The terror group threatened to "rain" more attacks on countries where cartoons are published of the Prophet Muhammad. The images carried in various Danish and other Western newspapers over the past three years have sparked periodic unrest in the Muslim world.

"They (the suspects) had very destructive designs. They wanted to create mayhem on a wide scale," city police chief Nasir Durrani told The Associated Press.

He said that the arrested men were Pakistanis and that their targets included the camp office in Rawalpindi of President Pervez Musharraf, a longtime U.S. ally in its war on terror.

Durrani said authorities were still investigating whether the suspects had intended to target foreign embassies. He did not identify them or say whether they were affiliated to al Qaeda or any other militant group.

Pakistani officials have said Monday's attack was launched by a suicide attacker in a car equipped with fake diplomatic registration plates. They have not identified the attacker.

It was the deadliest strike against Denmark since the publication of cartoons' first sparked unrest in early 2006. In February this year, Danish papers reprinted one drawing of Muhammad in a bomb-shaped turban, stirring more anger.

In Thursday's purported claim of responsibility, an al Qaeda commander in Afghanistan, Mustafa Abu al-Yazeed, said the embassy bombing was carried out by an al Qaeda martyr with help from Pakistani militants. He threatened more violence.