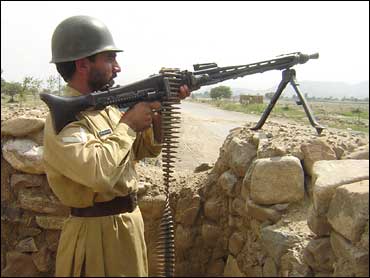 
The Pakistani military launched a missile strike Tuesday against three suspected al Qaeda hideouts in a remote region along the Afghan border, using missiles and helicopter gun-ships to bombard a group of 25 to 30 militants.

The attack was the most intensive of its kind this year, and drew immediate suspicion from western diplomats who questioned the timing — it came on the heels of top U.S. officials voicing concerns over Pakistan's failure to go after militants in the region.

Missiles rained down just hours after U.S. Defense Secretary Robert Gates arrived in Afghanistan to lend support to the NATO-led international defense force in that country as it takes on a resurgent Taliban, intent on fracturing the U.S.-backed government of President Hamid Karzai.

"Most of the miscreants were killed," said Major General Shaukat Sultan, director general of the Pakistani military's information wing.

Other Pakistani officials said the targets were at a small village called Zamzola in the south Waziristan region, which borders Afghanistan. The targets were spread across five compounds, each surrounded by mud walls with guard-posts between them, about 10 yards apart.

Giving a description of the location, a Pakistani official who asked not to be named told CBS News the targeted area is close to a forest which, in the past, has been used by militants for daytime training of recruits — apparently to keep them hidden from Pakistani military reconnaissance aircraft.

"We had been observing the activities here for a few months. The attack was launched after we were convinced that this was a militant training camp," the official said.

But western diplomats in Islamabad say the timing of the attack, coinciding with Gates' visit to Afghanistan, raises suspicions that this could be little more than a Pakistani attempt to ward off recent U.S. criticism.

The growing intensity of fighting in Afghanistan has provoked widespread western criticism against Musharraf for his failure to curb the flow of volunteers from Pakistan heading into Afghanistan to join militants.

"The Pakistanis, it seems, are trying to tell the world that they are serious about their commitment to fighting terror," said one western diplomat, who spoke to CBS News on condition of anonymity.

"The problem for Pakistan is that while there are some cases where they have attacked militants, there are plenty more cases of Taliban or al Qaeda attacks in Afghanistan," the diplomat said. "The Pakistani case so far remains unconvincing."

Last year, Taliban and al Qaeda militants launched more than 100 suicide attacks targeting either the Afghan government or western troops, including American forces, in that country.

The Associated Press reports the top U.S. commander in Afghanistan says there was a 200 percent increase in the number of attacks on U.S. and allied forces in December alone. Another official says attacks in the border area are up 300 percent since a peace deal between Musharraf and tribal leaders in the region went into effect last September.

Other diplomats warned that Tuesday's attack raises fresh questions over the controversial peace deal in north and south Waziristan.

Under the agreement, the government withdrew its troops while leaders of local tribes in Waziristan promised to stop all militants heading in to Afghanistan to join Islamic militant fighters there.

"If you still have suspects in a part of Waziristan who are being attacked, then the question is, shouldn't we say the Waziristan agreements have practically failed," said another western diplomat in Islamabad who also spoke to CBS News on condition of anonymity.

Meanwhile, in a setback to the Taliban propaganda effort, Afghan agents have arrested a purported militant spokesman as he crossed through an international border checkpoint from Pakistan, the national intelligence agency said Tuesday.

Muhammad Hanif, one of two spokesmen who would often contact journalists on behalf of the militia, was arrested at the border town of Torkham on Monday, said Sayed Ansari, the spokesman for Afghanistan's intelligence service.

Two people traveling with him were also detained, he said.