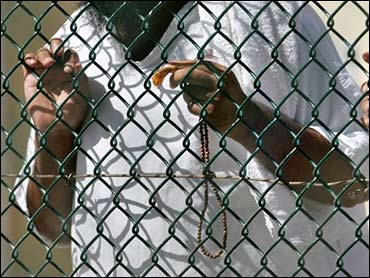 Pakistani authorities have abducted hundreds of people, accused them of terrorist ties and held them in secret locations or handed them over to U.S. authorities for American-offered rewards, Amnesty International claimed in a report issued Friday.

Angelika Pathak, a London-based researcher for the Amnesty International, said such U.S. rewards led to terror arrests and rights abuses in Pakistan.

"Bounty hunters - including police officers and local people - have captured individuals of different nationalities, often apparently at random, and sold them into U.S. custody," he said.

Pakistani government officials could not immediately be reached for comment.

The human rights group made its claims in a new report titled "Human Rights Ignored in the War on Terror," which accused Pakistan, a key U.S. ally, of systematically committing human rights abuses against Pakistani and foreign suspects.

The Amnesty allegations, largely based on interviews with one-time detainees, come days after the country's president, Gen. Pervez Musharraf, revealed in his memoir, "In The Line of Fire," that Pakistan had captured 689 al-Qaeda terror suspects, and turned over 369 to Washington.

"We have earned bounties totaling millions of dollars," Musharraf said, without specifying how much was paid.

Cordone said many detainees ended up in secret locations or at the U.S. prisons, including Guantanamo Bay and Bagram, north of Kabul.

"We know that a sizable proportion of them have ended up, actually, in Guantanamo Bay. Many more are still unaccounted for. We still don't where they are," Amnesty International spokeswoman told CBS News Radio reporter Vicki Barker in London.

Green told Barker that Amnesty believes bounty-hunting for detainees encourages human rights violations, and fails to make the world any safer from the threat of terrorism.

"Hundreds of people have been picked up in mass arrests, many have been sold to the USA as 'terrorists' simply on the word of their captor, and hundreds have been transferred to Guantanamo Bay, Bagram Air base or secret detention centers run by the USA," Cordone said. "The road to Guantanamo very literally starts in Pakistan."

In a statement, Amnesty said the increase of enforced disappearances and holding of suspects incommunicado puts such detainees at "risk of torture and unlawful transfer to third countries."

Amnesty said numerous detainees claimed that U.S. agents were present during interrogations that took place in Pakistan. The report also details the "unlawful transfer" of detainees into U.S. custody, including a Pakistani chicken farmer who was accused of being a deputy foreign minister for the Taliban and sent to Guantanamo Bay.

During his trip to the United States this week, Musharraf told CNN that CIA agents were working in the South Asian country, particularly in the southwestern city of Quetta, with Pakistani counterparts searching for militants.

Many innocents, including children, have also been rounded up in Pakistan under the pretext of the war on terror, the Amnesty report said.

"Some (children) were arrested alongside their adult relatives, some were themselves alleged to be terror suspects and some were held as hostages to make relatives give themselves up or confess," Amnesty said in the executive summary of the report, which is to be launched in Islamabad on Friday.

These include three women and five children detained during the July 2004 arrest of al Qaeda suspect Ahmed Khalfan Ghailani, a Tanzanian, who was allegedly involved in the 1998 bombings of U.S. embassies in East Africa that killed more than 200 people.

Ghailani was arrested after a gunbattle in Gujrat in eastern Pakistan. Among those reportedly taken into custody with him were a baby and a 13-year-old Saudi boy identified only as Talha.

"Nothing is known about the fate and whereabouts of the women and children," Amnesty said.

The report also described the detentions and killings of reporters and activists who had been targeted by Pakistani authorities. These include Hayatullah Khan, a journalist whose bullet-riddled body was found in the North Waziristan tribal region in June, more than six months after being detained.

Khan disappeared Dec. 5, 2005, days after he photographed shrapnel from a Hellfire missile allegedly fired by an unmanned American warplane that killed a wanted Egyptian al Qaeda figure, Hamza Rabia, in the North Waziristan town of Mir Ali, near where Khan's body was later found.

The photos sparked mass protests across this deeply Islamic country and spurred criticism of Islamabad's ties with Washington.

Members of Khan's family accused Pakistan's intelligence service of involvement, but authorities denied any government involvement. No one has claimed responsibility.