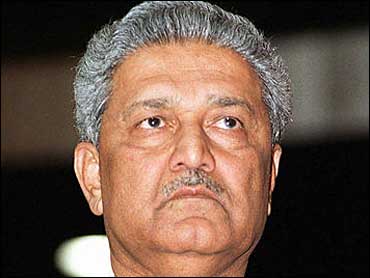 Khan made the confession in a written statement submitted "a couple of days ago" to investigators probing allegations of nuclear proliferation by Pakistan, the official told The Associated Press on condition on anonymity.

The transfers were made during the late 1980s and in the early and mid 1990s, and were motivated by "personal greed and ambition," the official said.

The official said the transfers were not authorized by the government.

A meeting of the National Command Authority that controls Pakistan's nuclear assets was briefed on the statement at a meeting on Saturday, when Khan — long regarded as a national hero in Pakistan — was sacked from his position as a scientific adviser to the prime minister.

They told journalists that Khan admitted to selling outdated "drawings and machinery" to the three countries to earn money for Pakistan. However, Khan claimed the transfers to Libya and Iran were also motivated by wanting to help other Muslim countries become nuclear powers, said two journalists who attended the briefing.

The government official said the two-month probe into the proliferation allegations had reached its conclusion, but said it was up to the authority to decide whether to prosecute Khan and six other suspects in the case.

President Gen. Pervez Musharraf, who heads the authority, is due to make an address to the nation about the progress of the investigation after the Muslim holiday of Eid al-Adha, the Feast of Sacrifice, which ends Thursday in Pakistan, officials said.

Pakistan began its investigation in November after revelations by Tehran to the International Atomic Energy Agency, the U.N. nuclear watchdog. Allegations of nuclear transfers to Libya and North Korea have also surfaced.

The government official said that "questions have been put" to two former army chiefs, Gen. Mirza Aslam Beg and Gen. Jehangir Karamat, to check information provided by Khan and other suspects during the "debriefings" — as the government has referred to the questioning of scientists.

The official stressed that the two generals were not the focus of the investigation. He said they told investigators they never authorized nuclear transfers.

However, the official said the probe had concluded there had been a lapse in security that allowed the transfers to take place, although no blame had been apportioned.

Analysts say that many unanswered questions remain over how powerful generals who oversaw the Pakistan's nuclear program that began in the 1970s — with the aim of creating a military deterrent against rival India — could have been so in the dark about any nuclear transfers by its scientists.

The mission to create the bomb was conducted in secret, using black market suppliers to circumvent international restrictions on trade in nuclear-related technology. Pakistan conducted its first nuclear test in 1998.

In all, 11 employees of the Khan Research Laboratories, a top nuclear facility named after Khan, have been questioned since November, and some subsequently released. Officials say that three scientists and four security officials — military officers among them — are still being investigated.

Six are held in custody in an undisclosed location. Khan has been told to stay at his Islamabad home, where he is guarded with tight security.

The journalists who attended Sunday night's briefing said Khan acknowledged in his 10-12 page written statement to giving "drawings and machinery" to Iran, Libya and North Korea. The transfers began in 1989 and continued for 10 years.

Khan told investigators he had provided the technology to other Muslim countries — Iran and Libya — so they could become nuclear powers, said the journalist.

The transfer to North Korea "was to divert attention of the international community from Pakistan," a journalist quoted one of the military officials as saying. Khan denied he made the transfers for personal gain.

"In 2001, before 9/11, Mr. Kahn, with two other Pakistani scientists went to Kandahar and spent time with Osama Bin Laden," Van Dyk said. "The United States wants to know, and has not yet found out, exactly what he discussed with bin Laden. Did they talk about radioactive bombs? We don't know."

Khan had met with Iranian nuclear scientists in the southern Pakistani port city of Karachi but it wasn't clear when, said the journalists, who did not want to be identified.

The government's move to publicize Khan's reported admissions could be a move to stall a backlash against his sacking.

Opposition parties have been quick to defend the scientists, particularly Khan, for their role in making Pakistan the Islamic world's first nuclear power. A hardline Islamic coalition said Saturday it planned to hold street rallies after the Eid holiday to protest Khan's dismissal.

In recent weeks, newspapers have reported that Khan had a vast array of real estate holdings, including a hotel in Timbuktu, Mali. He has also supported a number of educational institutes and charitable causes.

Musharraf pushed Khan out of his post as head of the nuclear lab in 2001 and named him scientific adviser to the prime minister — the post he relinquished on Saturday.