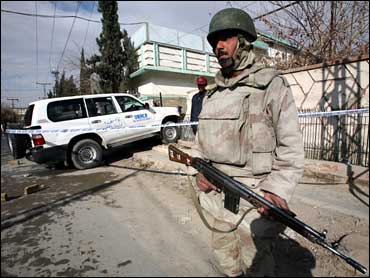 Militants blew up a bridge in northwest U.N. High Commissioner for Refugees has worked for three decades in the region helping hundreds of thousands of Afghans fleeing violence in their homeland.

In August, Lynne Tracy, the top U.S. diplomat in the northwest, narrowly survived an attack on her vehicle in Peshawar by suspected militants. In November, also in Peshawar, gunmen shot and killed American aid worker Stephen Vance.

Quetta has been mentioned by Afghan officials as a likely hiding place for Mullah Omar and other Taliban leaders thought to have fled Afghanistan after the U.S. invasion in 2001.

Baluchistan is also the scene of a low-level insurgency driven by nationalist groups wanting more regional autonomy. They are not known to target foreigners.

Meanwhile, at least 35 Islamist militants were killed in an overnight operation in Swat Valley, an area in the northwest which has been increasingly overrun with insurgents, Pakistan's military said in a statement.

Security forces used helicopter gunships and artillery in the attack, the army said.

Swat was once a popular tourist destination, but about two years ago militants began a violent campaign to enforce Taliban-style Islam there. The state responded with force, but residents say militants increasingly hold sway.

The region is now considered too dangerous for reporters to visit, making it difficult to verify casualty reports.