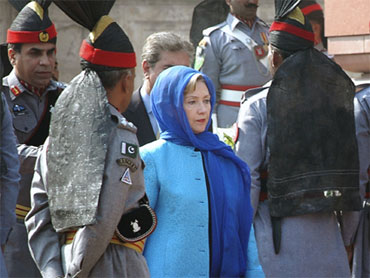 (AP Photo/Mansoor Ahmed)
Pakistani officials reacted angrily Thursday night to U.S. Secretary of State Hilary Clinton's remarks earlier in the day in which she said, she found it "hard to believe" that no one in Pakistan's government, including the country's "military security establishment," knew where al Qaeda leaders were hiding.

Left: Secretary of State Hillary Rodham Clinton is escorted by Pakistani Rangers at the Iqbal Memorial in Lahore, Pakistan, Oct. 29, 2009. Clinton is on a three-day state visit to Pakistan.

The controversy could overshadow Clinton's first visit to the country as Secretary of State, especially as her remarks will be seen questioning the sincerity of the influential military, Pakistani officials said.

"If we are going to have a mature partnership where we work together" then "there are issues that not just the United States but others have with your government and with your military security establishment," Clinton was quoted telling senior Pakistani journalists in Lahore. "I find it hard to believe that nobody in your government knows where they (al Qaeda leaders) are and couldn't get them if they really wanted to," she said.

In the past, Western officials, including U.S. officials, have claimed that the ISI has nurtured Islamic militants to stage proxy insurgency campaigns on the country's behalf in India's mountainous Kashmir region and in Afghanistan.

A senior Pakistani government official who spoke to CBS News on condition of anonymity late Thursday night said, Clinton's remarks will likely provoke some reaction from key military leaders who increasingly see the U.S. as insensitive to the army's ongoing campaign against Taliban militants in the south Waziristan region.

"How can the U.S. at this time be so insensitive for Mrs. Clinton to speak out in public in this way," asked the Pakistani government official. "These remarks suggest a very high degree of insensitivity." However, Western diplomats said Clinton's trip following the recent Kerry-Lugar bill passed by the U.S. Congress which triples U.S. aid to Pakistan to an annual of $1.5 billion over the next five years, was likely to enhance U.S. influence in the country.

"The U.S. position will become stronger if the money begins flowing in. While there will be heart-burning among segments of the Pakistani government, the U.S. will remain a very influential country," a Western diplomat in Islamabad told CBS News.