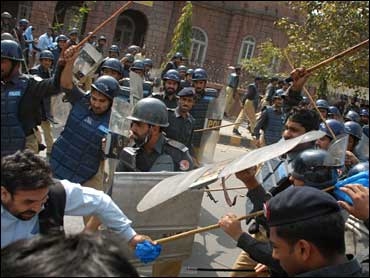 Pakistan's growing political turmoil risks drawing in the military into a political role, and endangers U.S. interests in the war on terror across the Pak-Afghan region, two western ambassadors in Islamabad warned Sunday night, in separate interviews with CBS News.

These warnings came after a day of mayhem in Lahore, the country's second-largest city and its political nerve center, where supporters of opposition leader Nawaz Sharif clashed with police and security services.

Sharif's defiance of a government order early on Sunday to keep him under house arrest in Lahore prompted thousands of opposition supporters to come out on the streets.

"This is a day when Pakistan will change. We have to use that change to serve the best interests of our country," said Sharif, just before he left his home in Lahore's upper-class model town district.

In Islamabad, a western ambassador told CBS News' that the large-scale protests in Lahore had weakened the government of Pakistan's president Asif Zardari, and raised questions over his government's ability to keep control in the country.

"I can not imagine how the government of Pakistan will be able to sustain this pressure. If the build-up continues and there is unrest in the coming days, there could be chaos," said the western ambassador who spoke to CBS News on condition of anonymity.

As the crisis grows in Pakistan, so do concerns over the role to be played by General Ashfaq Pervez Kiyani, the Army Chief of Staff. The army has ruled Pakistan for just over half its 62-year existence as an independent state, after it won freedom in 1947 from British colonial rule.

The second ambassador who spoke to CBS News (also on condition of anonymity) warned that the military was at risk of becoming involved in the crisis, though it was unlikely to take over the country. 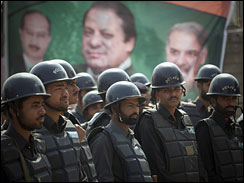 On Friday, Kiyani held separate meetings with both Zardari and prime minister Yusuf Raza Gilani, and is widely believed to have urged both men to be more conciliatory towards Sharif.

However, Sunday's protests, which came in the midst of a continuing government crackdown, appeared to suggest that government leaders had so far not accepted Kiyani's advice.

"Even if the leaders are not listening to General Kiyani, that doesn't change the basic reality. The army has an influential role in Pakistan," said the second western ambassador who spoke to CBS News. The ambassador said, however, that Kiyani was unlikely to stage a coup, especially given the army's involvement in battling Islamic Taliban insurgents in areas along Pakistan's border with Afghanistan.

General Kiyani has told his friends in the past that he has no interest in taking the army back to a formal role in running the country. But the army could still be crucial in putting more pressure on the country's rulers to accept the opposition's demands - especially if conditions deteriorate further, said the second western ambassador who spoke to CBS News.