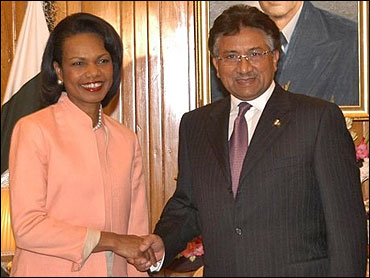 Pakistan's Foreign Ministry responded angrily to a call by Secretary of State Condoleezza Rice for democratic elections next year, saying it doesn't need "outside" advice.

The comments came in a statement late Wednesday, a day after Rice met with President Gen. Pervez Musharraf in Pakistan's capital.

En route to Islamabad, Rice told reporters "there has to be, the world expects there to be, democratic, free and fair elections in Pakistan in 2007."

Musharraf, a close U.S. ally in the war on terror, seized power in a bloodless military coup in 1999.

Although Washington has said it wants free and fair elections in Pakistan, Rice did not raise the issue during her talks with Pakistani officials, the ministry said.

"On the democratic processes in Pakistan, we do not require advice from outside," the statement said, adding that Pakistan's leadership is committed to having "free and fair elections."

Pakistan's parliament chooses the president, but it is unclear if that vote will occur before or after the legislative elections.

Musharraf's ruling Pakistan Muslim League has indicated it may call for the presidential vote to be held before the parliamentary polls, apparently to guarantee the general another term.