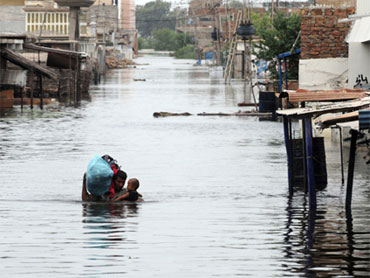 Floodwaters that have devastated Pakistan for five weeks are beginning to recede in some areas, but not the misery they've left behind.

Flooding has submerging or affected almost one-fifth of the country, and about 8 million people still need emergency aid.

Waters have begun to recede in the north and in the eastern province of Punjab, but they have been submerging towns in southern Sindh province close to the Indus River over the last 10 days.

Government official Hadi Bakhsh said the last two towns in the path of the floods were hit late Monday.

"The floodwaters hit Khahre Jamali and Jati towns last night, and now there is no other village or town in the way of the deluge," he said, adding that people had already fled the towns, parts of which were under 10 feet of water.

"The floodwaters are now heading to the Arabian Sea," he said.

Authorities have struggled to feed, house and arrange medical care for the survivors of the floods. Foreign countries and the United Nations were slow to respond to the disaster, in part because it took a long time for its extent to become clear.

The magnitude of the disaster has raised concerns about the stability of nuclear-armed Pakistan, which is already reeling under al Qaeda and Taliban violence and massive economic woes.

The international community has pledged hundreds of millions of dollars. Even Pakistan's archenemy, India, has offered assistance, announcing today that it is increasing its aid five-fold, to $25 million.

Aid is slowly reaching the worst-affected areas by army helicopter, road and boat, but millions have received little or no help. The U.N. warned that additional funding for emergency food was urgently needed to ensure supplies into next month.

"There is a triple threat unfolding as this crisis widens and deepens — people have lost seeds, crops and their incomes, leaving them vulnerable to hunger, homelessness and desperation," said Sheeran. "We urgently need continued and strengthened commitment to the people of Pakistan in this time of crisis."

WFP has provided one-month's food ration to nearly 3 million; three quarters of a million children have received nutritious food supplements. But children at risk of malnutrition — already high in the region before the flooding began — are now at risk for water-borne diseases.

"What I saw today has convinced me that we must step up our humanitarian operations to stave off a potential second wave of disease and misery for millions of families, especially the most vulnerable, children and women," said UNICEF executive director Anthony Lake, who was also visiting Punjab.

UNICEF is currently providing clean water to about two million people, and is also providing hygiene supplies and assistance in sanitation to help prevent disease outbreaks.

Once all the floodwaters recede, the country will be left with a massive relief and reconstruction effort that will cost billions of dollars and take years.

An estimated 1 million homes have been damaged or destroyed, five times as many as were hit by this year's earthquake in Haiti.