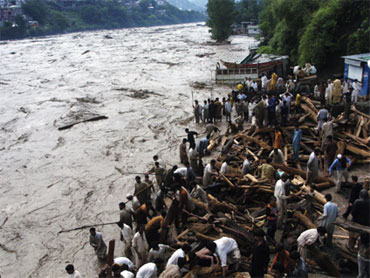 A regional minister says the death toll in floods that have lashed Pakistan has risen above 800.

Mian Iftikhar Hussain, the information minister for Khyber-Pakhtoonkhwa province in Pakistan's northwest, said Saturday that the death reports have come in from districts around the region this past week.

Deluged roads and damaged bridges are hampering rescuers from reaching thousands of flood victims, and fears of disease are rising as some evacuees showed signs of diarrhea, fever and other illnesses.

"There are very bad conditions," said Amjad Ali, a rescue worker in the Nowshera area. "They have no water, no food."

Rescuers were using army helicopters, heavy trucks and boats to try reaching flood-hit areas, the U.N. said. It reported that thousands of homes and roads were destroyed, and at least 45 bridges across the northwest were damaged.

The destruction is slowing the rescue effort, said Luther Rehman, a government official in Khyber-Pakhtoonkhwa, the northwest province. Floodwaters were receding in some areas there, he said.

"Our priority is to transport flood-affected people to safer places. We are carrying out this rescue operation despite limited resources," he said, adding they needed more helicopters and boats.

The U.N. estimated Saturday that some 1 million people were affected, including hundreds of thousands stranded in remote villages.

The northwest has been the hardest hit province in the extraordinary flooding caused by the monsoon rains. It was the worst flooding in the region since 1929.

TV footage showed people clinging to fences and to each other as water gushed over their heads. Scores of men, women and children sat on roofs.

A doctor treating evacuees at a small relief camp in Nowshera said some had diarrhea and others had marks appearing on their skin, causing itching. Children and the elderly seemed to have the most problems, Mehmood Jaa said.

"Due to the floodwater, they now have pain in their bodies and they are suffering from fever and cough," Jaa told The Associated Press.

The flooding capped an already deadly week in Pakistan. , and bad weather is suspected to have played a role.