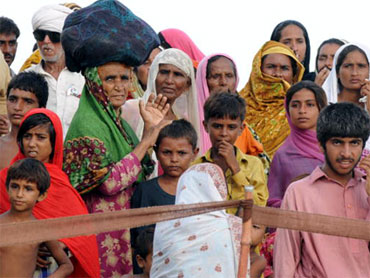 For generations, the Indus River was a lifeline. Now it has turned destroyer, ripping up rice, wheat and sugar cane crops and leaving behind bloated corpses of cows and goats.

When the floodwaters recede, millions of farmers who used the Indus to irrigate their crops - and propel Pakistan's economy - face an uncertain future.

The United Nations warns that unless farmers in hard-hit Punjab and Sindh provinces manage to plant their winter crop of wheat in mid-September as normal, there might be food shortages in the region and the nation as a whole.

In the north, where the floods began nearly three weeks ago, fruit farmers are also hurting.

Last year, cherries, peaches and apricots in the Swat Valley rotted on the trees because of an army operation against Taliban militants. This year, roads and bridges have been washed away so crops cannot be carried to the rest of the country.

The most destructive floods in Pakistan's recorded history have affected an estimated 62,000 square miles of land - about a fifth of the already poor country. Around 20 million people have had their lives disrupted, and 1,500 have been killed.

The scale of the disaster has overwhelmed authorities and led to fears of social unrest, especially given the weak and unpopular government. Hundreds of thousands are living in makeshift camps or by the side of the road, soaking up monsoon rains and surviving on handouts. Many have brought their valuable livestock with them.

The disruption in food supplies is causing price increases across the country.

Hundreds of people Monday blocked a major highway with stones and garbage near the hard-hit Sukkur area in Sindh, complaining of the slow dispersal of aid. They said government officials only handed out food when media were present.

"They are throwing packets of food to us like we are dogs," said protester Kalu Mangiani. "They are making people fight for these packets."

More than 70 percent of affected people rely on agriculture for their livelihood, according to the U.N. Many are subsistence farmers like Abdur Razaq, who had 15 acres of land where he grazed two buffalo and two cows. The money he got from those animals was enough money to feed his wife and five children.

He said authorities told him that his land was safe from the floods but that turned out to be false: the high water came rapidly at night. He could only think of saving his family, leaving his animals to the floods.

"Only a prophet could pass a test as stern as the one we are going through now. It is beyond our capacity. It is coming from Allah," Razaq said, raising a finger skyward.

The Indus has its source in Tibet. From there, it skirts China, heads into India then enters Pakistan south of the Karakoram range before starting its long journey - 1,976 miles - through the heart of the country into the Arabian sea in Karachi.

The river has irrigated crops since the Bronze Age, when the region was home to the thriving Indus Valley Civilization. The current system of canals and dams that make the it the breadbasket of Pakistan date back to British colonial rule.

By the time the river gets to Punjab and Sindh, it can reach more than a half-mile wide during a normal monsoon season.

Now, after floods fed by exceptionally heavy monsoon rains, it stretches more than 15 miles. On either side of the Indus National Highway close to Sukkur, floodwaters stretch for hundreds of yards, with the occasional sugar cane plant visible above the water.

The extent of the damage is still being calculated, and new flooding is occurring.

But the U.N. Food and Agriculture Organization estimated 1.7 million acres of crops had been destroyed. Foreign Minister Shah Mahmood Qureshi said losses would amount to "billions of dollars."

Ibrahim Mughal, the chairman of Agri Forum Pakistan said farmers should be given enough seeds, fertilizer and pesticide for at least two crop cycles so they could get back on their feet.

Farming is a mainstay of the Pakistani economy, accounting for about 23 percent of the its gross domestic national product and the largest chunk of its foreign exchange. Ashfaq Hasan Khan, an economic adviser to former President Pervez Musharraf, predicted that the floods may knock up to a percentage point off the government's target of 4.5 percent GDP.

Amid the gloom, Khan and Qurban Burraro, an agriculturist, saw a glimmer of hope.

They said fields may actually be more fertile once the waters recede because of the rich topsoil and composting effect of other organic matter dumped by the floods. Increased yields brought by frequent flooding of lands close to the river is one reason why so many people live there.

After the 2004 tsunami in Indonesia, some farmers reported bumper crops of vegetables, peanuts and rice, even on land that had been inundated with seawater.

"A new chapter will start after the water recedes," said Burraro, predicting good wheat crops in November and December if seeds can be planted in time.

"We need to support the farming community in the best way so they make up their losses by capitalizing on the golden fertility that the River Indus has brought down."

Thinking that far ahead is a struggle for many farmers.

"The water may take six to seven months to recede, but I still may not be able to cultivate my land because it will be too soft," said Liaqat Ali, who was sheltered with his family under his trailer by the road in Sukkur.