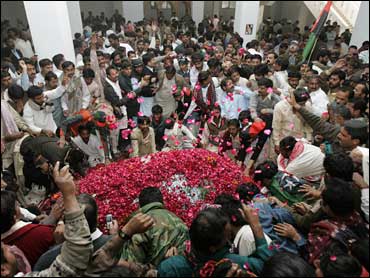 Pakistan's ruling party said Sunday that crucial Jan. 8 elections may be delayed up to four months because of the assassination of opposition leader Benazir Bhutto, while her supporters debated who should succeed her as party chief.

Bhutto's slaying last Thursday plunged the nuclear-armed country into a political crisis and triggered nationwide riots that left at least 44 people dead ahead of the parliamentary polls, seen by the United States and other Western nations as key to promoting stability in the country.

Controversy remained about whether she was killed by gunshots, a shrapnel wound or the concussive force of the blast.

She was buried without an autopsy and the debate over her cause of death undermined confidence in the government and further angered her followers, many of whom believe elements within President Pervez Musharraf's administration played a role in the killing.

Tariq Azim, information secretary of the Pakistan Muslim League-Q, said the parliamentary elections would lose credibility if it they are held on Jan. 8, with Bhutto's party in mourning and other opposition groups intent on boycotting.

He expected authorities to announce a delay within 24 hours.

"How long the postponement will be for will up to the Election Commission," he told The Associated Press. "I think we are looking at a delay of a few weeks ... of up to three or four months."

"Because of the violence we have seen, polling stations burned, material destroyed, we cannot even reach all the polling stations and supply them," Michael Gahler of The European Union Observer Mission tells CBS News Correspondent Sheila MacVicar.

On the streets people are beginning to agree. Not because they don't want democracy, reports MacVicar, but because elections right now could not possibly be fair.

Leaders of her Pakistan People's Party, meanwhile, were meeting Sunday in her ancestral home of Naudero in southern Pakistan to decide on a successor as party chief - with either her son or husband seen as favorites.

Police struggled to control thousands of mourners outside the meeting, who shouted "Musharraf is a killer!" and called for the separation of Bhutto's home province of Sindh from the rest of Pakistan.

"Benazir Bhutto sacrificed her life for the sake of this country and for democracy," her husband Asif Ali Zardari told mourners after they had thrown flowers at the mausoleum where she was buried. "But her blood will not be in vain ... Bhutto will remain alive in the hearts of people."

CBS News Chief Foreign correspondent Lara Logan reports that the Bhutto dynasty will continue for another generation. Bilawal, her 19-year-old son is stepping into his mother's shoes, taking over leadership of her political party.

Bhutto's father - Pakistan's first elected prime minister - founded the party in 1967 and its electoral success since then has largely depended on the Bhutto name.

Other party members said Bhutto's husband, a key powerbroker who was freed in December 2004 after eight years in detention on graft charges, should take the job.

"We will come up with a consensus, Bhutto's will and the meeting will determine it," Zardari told reporters when asked whether he wanted the post. "The party has a lot of brave people and a lot of brave leaders."

Since Thursday, unrest has killed at least 44 people and caused tens of millions of dollars of damage. Rioters have destroyed 176 banks, 34 gas stations, 72 train cars, 18 rail stations, and hundreds of cars and shops, the government says.

They have also wrecked nine election offices - along with the voter rolls and ballot boxes inside - hampered the printing of ballot slips and the training of poll workers, the election commission said. The commission has called an emergency meeting for Monday.

In fresh violence, two men blew themselves up Sunday close to the residence in eastern Pakistan of Ijazul Haq, the former religious affairs minister and senior leader of the ruling Pakistan Muslim League-Q party, said district police chief Zafar Abbas Bukhari. Both men died, but there were no other casualties.

Video footage of Bhutto's assassination shows a man shooting at her three times from close range seconds before her car is caught up in an explosion from a suicide attacker.

Authorities initially said she died from bullet wounds, but Interior Ministry spokesman Javed Iqbal Cheema later said Bhutto was killed when shockwaves from the bomb smashed her head into the sunroof. Bhutto's spokeswoman Sherry Rehman said she and other witnesses saw a bullet wound in her neck and said Cheema's remarks were "dangerous and nonsensical."

The government blamed the attack on Baitullah Mehsud, a Taliban commander with links to al Qaeda, who heads a militant coalition based in its lawless tribal regions. The coalition is committed to fighting the government and its support of the U.S.-led war on terror. But his spokesmen denied the charge.

A spokesman for Bhutto's party, Farhatullah Babar, said the government's accusations appeared to be "a planted story, an incorrect story, because they want to divert the attention."

Cheema said Bhutto's party was free to exhume her body to conduct an autopsy, but rejected calls for an international investigation. An independent domestic judicial investigation should be completed within seven days of the appointment of its presiding judge, he said.