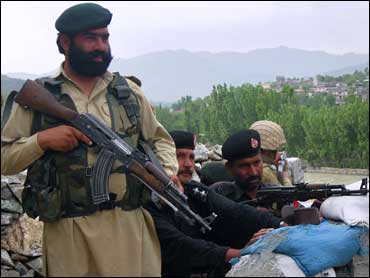 The United States has criticized Pakistan for letting the Taliban take over key areas near the capital.

The Taliban started pulling out last week, and tonight the Pakistani military is trying to keep them out for good. These are the same militants who've been attacking U.S. troops in Afghanistan, as CBS News chief foreign affairs correspondent Lara Logan reports.

A Taliban propaganda video obtained by CBS News shows a small U.S. forward operating base in the mountain of Kunar in Afghanistan under heavy attack.

At one point in the fight, U.S. soldiers are extracted by a Medevac chopper. The Taliban cameraman records up-close images of U.S. troops being lifted to safety.

The images also show a U.S. Chinook helicopter being hit, downing its cargo. A U.S. Humvee is destroyed.

Kunar is right next to the Pakistan district of Dir. The only thing separating them is the porous, poorly-guarded border. And in Dir, a major Pakistani operation is underway right now against Taliban militants.

Defeating the militants in Pakistan is critical to U.S. success on the Afghan side of the border. That's what America's top military commander told CBS News when we spoke to him by phone from his plane. He was flying back from this region to the U.S.

"There is a direct relationship," said Admiral Michael Mullen, Chairman of the Joint Chiefs of Staff

That's why the recent show of strength by Taliban militants in Dir and the neighboring Swat Valley is so worrying to U.S. officials. Nuclear-armed Pakistan falling to extremists is Adm. Mullen's "worst case scenario".

"Obviously, I've got thousands of troops in Afghanistan," he said, "and the combination of continued deterioration in Pakistan to what could be a worst case scenario, almost makes Afghanistan impossible to turn around."

For now, the U.S. is keeping its forces on the Afghan side of the border, not sure how committed Pakistan is to the fight.