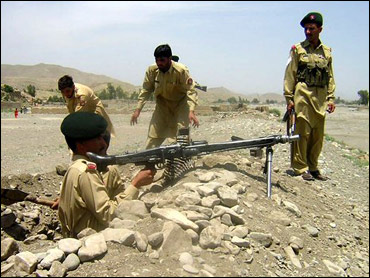 Osama bin Laden is on the run with a small band of fighters, but his al Qaeda network has been paralyzed by Pakistani government forces, the country's foreign minister was quoted as saying Friday.

Foreign Minister Khursheed Kasuri declined to say whether Pakistan had specific information on the whereabouts of the world's most wanted fugitive, accused by the U.S. of orchestrating the Sept. 11, 2001, attacks on New York and the Pentagon.

"Osama bin Laden is alive and moving around from place to place, but not with a large group of people," Kasuri was quoted as saying in the English-language newspaper The News.

Pakistan's intelligence service captured Abu Farraj al-Libbi, reputed to be al Qaeda's No. 3 leader, on May 2.

Al-Libbi — who remains in Pakistan's custody — was wanted for allegedly masterminding two December 2003 assassination attempts against President Gen. Pervez Musharraf, who escaped unharmed. Seventeen other people were killed, however.

Pakistan, a key ally of the United States in its war on terror, has handed over more than 700 al Qaeda suspects to U.S. officials, including al Qaeda's former No. 3, Khalid Shaikh Mohammed, who was arrested in March 2003 during a raid near Islamabad.

Pakistan has also deployed about 70,000 troops in its tribal regions — considered possible hiding places for bin Laden — to track down suspected terrorists.

On Friday, tribal elders set fire to the homes of two pro-Taliban clerics for allegedly sheltering militants in the northwestern Pakistan town of Bajor, according to residents.

The action came weeks after Pakistani intelligence agents raided the homes of Faqir Ahmad and Mohammed Bashir and arrested 11 terror suspects, some of them foreigners.

No one was inside the homes when the elders burned them — apparently to satisfy the government, which has said it will take stern action against those who would shelter terrorists.