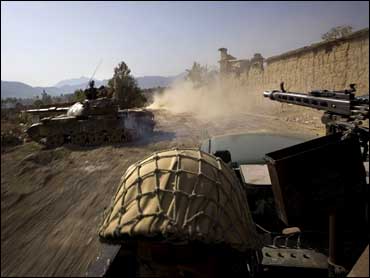 A two-month offensive by Pakistani forces has driven militants from a stronghold through which Taliban and al Qaeda fighters had poured into neighboring Afghanistan to attack U.S. troops, the army said Saturday.

But the operation has cost the lives of at least 95 civilians as well as 73 troops and left a trail of devastation in a region where poverty already drives young Muslims into the arms of extremists.

The military said its forces captured Loi Sam in the Bajur tribal region on Friday after a long and bloody struggle. The town sits on a vital intersection of roads leading to the border as well as to three neighboring Pakistan regions.

"Now we have complete control in this area from where miscreants used to go to Afghanistan, Mohmand, Dir and Swat," army spokesman Maj. Gen. Athar Abbas told reporters brought to the intersection on Saturday. "Miscreants have been expelled or killed."

Bajur is part of Pakistan's tribal belt that has become the stronghold of Taliban and al Qaeda fighters waging an intensifying insurgency on both sides of the border.

Pakistan's army launched an offensive in Bajur in early August, saying the region had become a "mega-sanctuary" for militants who had set up a virtual mini-state with Taliban-style courts.

U.S. officials worried about record fatalities among their forces in Afghanistan have praised the operation and said it was helping reduce violence on the Afghan side.

However, there has been no halt to the regular American missile strikes on suspected militants hide-outs in other parts of Pakistan's wild border region, despite Islamabad's protests that its American allies are violating its sovereignty.

The army says it faced stiff resistance near Loi Sam from local Taliban militants reinforced by foreign fighters, including some from Afghanistan. More areas remain to be cleared, and Maj. Gen. Tariq Khan, who commands a paramilitary force involved in the fighting, said it could take six months to a year to gain complete control of Bajur.

The generals spoke to reporters flown into Bajur on a military helicopter. Poor security and government restrictions have made it virtually impossible to verify accounts of the fighting.

Khan said a total of 1,500 suspected Pakistani and foreign militants had died in the operation. He said they included several "important" commanders but declined to name them.

The region has been seen as a possible hiding place for al Qaeda leader Osama bin Laden and his deputy, Ayman al-Zawahri, but Khan said the troops had not picked up their trail.

His count of 95 civilian deaths was the first official estimate of the toll on noncombatants - a critically sensitive issue in Pakistan as well as Afghanistan, where observers warn that wronging civilians only increases sympathy for the militants.

He didn't say whether they were killed by militants or troops, though officials have acknowledged that artillery and airstrikes have devastated many residential areas.

Nearly 200,000 people have fled the fighting, many of them to rough camps in Pakistan and Afghanistan.

What reporters driven from Khar, the region's main town, to Loi Sam on Saturday saw made plain that many of them have nothing but despair to return to.

In one village along the road, devastated residential compounds, some of them connected by militant tunnels, lined both sides of the road. Bloodstained pillows and twisted aluminum cooking pots lay in one pile of rubble in an area strewn with thousands of spent shell cases.

In Loi Sam itself, hardly a building had escaped. Houses, shops and gas stations were badly damaged or destroyed. There was no one to talk to except the troops, some of whom stood around a line of tanks on a street strewn with dust and debris.

Abbas said the victims would be compensated for the loss of their homes and the crops and animals dying untended in the fields.

Pakistan's government has promised to flood the border area with development work, much of it funded by Washington, to combat the misery and ignorance in which religious extremism has thrived.

But observers say Pakistani authorities and their Western backers have failed to keep such promises in the past, breeding distrust of the government in a region where it has never had control.

Under a plan to turn the paramilitary Frontier Corps into the main fighting force along the border, some 32 U.S. troops arrived in Pakistan this month to provide training in using modern weapons and gathering intelligence.

Officials hope the Frontier Corps, recruited from the Pashtun tribes which straddle the border, will prove more effective in preventing militants from resurfacing than the regular army, a force dominated by ethnic Punjabis and viewed as occupiers in the border zone.

American commanders also hope the force will do more to stop militants slipping into Afghanistan - an enduring complaint of U.S. officials and one reason that Washington has authorized stepped-up missile strikes.

Indicating the potential, Khan said the flow of militants in the opposite direction into Bajur had eased recently. After a tip from Pakistan, American-led troops had "effectively checked" a group trying to cross into Pakistan on Friday night, Khan said.
By Associated Press Writer Munir Ahmad