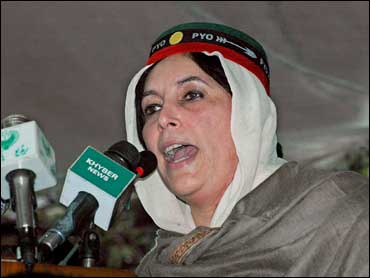 Pakistan's government announced it had evidence that an al Qaeda operative was behind the assassination of Benazir Bhutto, who was laid to rest Friday as the army tried to quell a frenzy of rioting that left 27 people dead less than two weeks before national elections.

The government, led by President Pervez Musharraf, also said Bhutto was not killed by gunshots or shrapnel as originally claimed. Instead, it said her skull was shattered by the force of a suicide bomb blast that slammed her against a lever in her car's sunroof.

The new explanations by the government in the death of Bhutto, Musharraf's most powerful foe in the elections, were part of a rapidly evolving political crisis. The rioting by Bhutto's furious supporters raised concerns that this nuclear-armed nation, plagued by chaos and the growing threat from Islamic militants even before the killing, was in danger of spinning out of control.

Pentagon officials said Friday they have seen nothing to give them any worries about the state of Pakistan's nuclear arsenal.

While many grieving Pakistanis turned to violence, hundreds of thousands paid their last respects to the popular opposition leader as she was placed beside her father in a marble mausoleum in the Bhutto ancestral village in southern Sindh province.

"I don't know what will happen to the country now," said mourner Nazakat Soomro, 32.

The government said it would hunt down those responsible for her death in the lawless tribal areas along the Afghan border where Osama bin Laden and other al Qaeda leaders are thought to be hiding.

The government released a transcript Friday of a purported conversation between militant leader Baitullah Mehsud and another militant.

"It was a spectacular job. They were very brave boys who killed her," Mehsud said, according to the transcript. The government did not release an audiotape.

But the government's revelations raise more questions than they answer, reports CBS News correspondent Sheila MacVicar. If they could record this conversation, why were they unable to reach the suspects in time to stop the attack?

Cheema described Mehsud as an al Qaeda leader who was also behind most other recent terror attacks in Pakistan, including the Karachi bomb blast in October against Bhutto that killed more than 140 people.

Mehsud is thought to be the commander of pro-Taliban forces in the tribal region of South Waziristan, where al Qaeda fighters are also active.

In the transcript, Mehsud gives his location as Makin, a town in South Waziristan.

The spokesman for Baitullah Mehsud, dismissed the allegations as "government propaganda."

"We strongly deny it. Baitullah Mehsud is not involved in the killing of Benazir Bhutto," the spokesman, Maulana Mohammed Umer, told The Associated Press by phone.

Bhutto's party also rejected the claims, saying Mehsud through emissaries had previously told Bhutto he was not involved in an earlier attempt on her life.

This fall, Mehsud was quoted in a Pakistani newspaper as saying that he would welcome Bhutto's return from exile with suicide bombers. Mehsud later denied that in statements to local television and newspaper reporters.

One of Bhutto's first priorities if she were elected president would have been to do something about the "privileged sanctuaries" the Taliban and al Qaeda used along the Afghanistan border, journalist and friend of Bhutto Arnaud de Borchgrave told CBS' The Early Show.

Cheema announced the formation of two inquiries into Bhutto's death, one to be carried out by a high court judge and another by security forces. Bhutto was assassinated Thursday evening after a rally in the garrison city of Rawalpindi near Islamabad. Twenty other people also died in the attack.

On Thursday, authorities had said Bhutto died from bullet wounds fired by a young man who then blew himself up. A surgeon who treated her, however, said Friday she died from the impact of shrapnel on her skull.

But later Friday, Cheema said those two accounts were mistaken. He said all three shots missed her as she greeted supporters through the sunroof of her vehicle, which was bulletproof and bombproof.

He also denied that shrapnel caused her death, saying Bhutto was killed when she tried to duck back into the vehicle, and that the shock waves from the blast knocked her head into a lever attached to the sunroof, fracturing her skull. The government released a photograph showing blood on the lever.

Denying charges the government failed to give her adequate security protection, Cheema said it was Bhutto who made herself vulnerable and pointed out that the other passengers inside Bhutto's bombproof vehicle were fine.

"I wish she had not come out of the rooftop of her vehicle," he said.

Bhutto's death sparked deadly rioting that killed at least 27 people, according to an Interior Ministry official who spoke on condition of anonymity because he was not authorized to speak to the media.

Another six people died from suffocation in Mirpurkhas, about 200 miles northeast of Karachi, when a bank building was set on fire, said Ghulam Mohammed Mohtaram, the top civilian security official in Sindh province.

About 7,000 people in the central city of Multan ransacked seven banks and a gas station and threw stones at police, who responded with tear gas. Media reports said 200 banks were attacked nationwide.

An Associated Press reporter saw nine cars of a train completely burned. Witnesses said all the passengers were pulled out before the train was torched.

Desperate to quell the violence, the government sent troops into the streets of Hyderabad, Karachi and other areas in Sindh. In Hyderabad, the soldiers refused to let people out of their homes, witnesses said.

The army readied 20 battalions of troops for deployment across Sindh if they were needed to stop the violence, according to a military statement.

"We will sternly deal with those who are trying to create disorder," Cheema said.

Paramilitary rangers were also given the authority to use live fire to stop rioters from damaging property in the region, said Maj. Asad Ali, the rangers' spokesman.

"We have orders to shoot on sight," he said.

Many cities were nearly deserted as businesses closed and public transportation came to a halt at the start of three days of national mourning for Bhutto.

Prime Minister Mohammedmian Soomro said the government had no immediate plans to postpone Jan. 8 parliamentary elections, despite the violence and the decision by Nawaz Sharif, another opposition leader, to boycott the poll.

"Right now the elections stand where they were," he told a news conference.

The United States, which sees Pakistan as a crucial ally in the war on terror, was counting on Musharraf to proceed with the vote in the hope it will cement steps toward restoring democracy after the six-week state of emergency he declared last month.

Keeping the election on track was the biggest immediate concern in sustaining an American policy of promoting stability, moderation and democracy in Pakistan, U.S. officials said Friday.

Bhutto's death left her populist party without a clear successor. Her husband, Asif Ali Zardari, who was freed in December 2004 after eight years in detention on graft charges, is one contender to head the party although he lacks the cachet of a blood relative from the Bhutto clan's political dynasty.

Throughout the day, hundreds of thousands of mourners arrived in Bhutto's hometown of Garhi Khuda Bakhsh in tractors, buses, cars and jeeps for her funeral cortege and burial.

Bhutto's plain wood coffin, draped in the red, green and black flag of her Pakistan People's Party, was carried in a white ambulance toward the marble mausoleum about three miles away, passing a burning passenger train on the way.